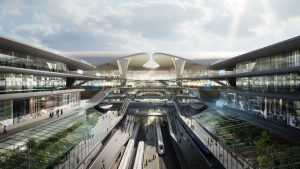 The Solidarity Transport Hub includes the construction of the Solidarity Hub, a central airport for Poland and a transfer hub for Central and Eastern Europe, situated 37 km from the center of Warsaw. The investment will also cover a network of 1,800 km of railway lines and 400 km of new expressways.

The government wants to create a universal passenger transport system by building and operating a profitable, modern transport hub, which will be ranked in the top ten of the best airports in the world. It is also including the construction of the national rail transport system as an attractive alternative to road transport. This system will cover all areas of Poland, while ensuring the development and permanent integration of the Warsaw and Łódź agglomerations.

The project involving the airport is expected to be completed by the end of 2027, while the first 531 km of railway infrastructure is to be constructed from 2034, under the next EU financial perspectives. By 2023, it is planned to complete the preparatory work for 1,600 km of railway lines.

Along with the new interchange, over 530 km of new railway lines will be launched which include the Warsaw – CPK – Łódź – Sieradz – Wrocław – Wałbrzych – border with the Czech Republic route. Under the project, the travel time from the capital city to Rzeszów and Zamość will be shortened, and the trains will return, among others to Łomża thanks to the extension of the railway line from Ostrołęka. 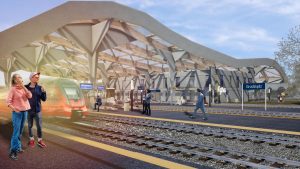 Due to the complexity of the undertakings included in the Solidarity Transport Hub investment programme, its implementation is divided into stages. The first phase will be realised from 2020 to 2023 and involves a preparatory stage comprising the works related to planning and developing design assumptions. This year, the CPK will start the real estate purchasing process.

PLN 12.8 billion (EUR 2.8 billion) is the total cost of the first phase of the Solidarity Transport Hub. The programme does not require the involvement of funds from the state budget until 2023. Most of the investments will be made of Treasury securities issued for this purpose.