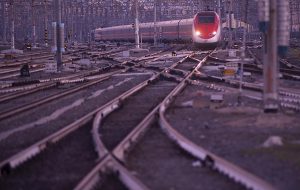 Rete Ferroviaria Italiana (RFI) has signed a contract with a consortium led by Webuild for the construction of Orsara – Bovino rail section on the Napoli – Bari high-speed line.

EUR 430 million was the value of the tender and RFI will allot a total investment of EUR 561.6 million which includes other costs and expenses.

The contract was signed with a consortium comprising Webuild, Impresa Pizzarotti and Astaldi under which Webuild is the leader with a 70 per cent stake and the remaining 30 per cent being held by Pizzarotti.

The consortium will construct a 11.8 km section between Orsara and Bovino, crossing the Avellino and Foggia provinces.

The Orsara – Bovino rail section is part of an upgrade of the Naples-Benevento-Foggia-Bari railway, which foresees the increase of the line’s capacity in order to make rail transport more competitive than road transport. The upgrade will improve the rail network in the southeast with a high-speed/high-capacity service that will increase service across the south.

The line will allow trains to run at speeds ranging between 200 km/h and 250 km/h. The project will double the capacity of the existing single track along this section, passing for the most part through a tunnel of 9.871 km in length. It will also comprise a temporary connection of a double-rail line with the historic one for 1.08 km, supporting trains travelling at speeds of up to 90km/h.

The rail section on the Napoli – Bari high-speed line which will reorganize the rail traffic and will develop the metropolitan, regional and long-distance connections which were planned as part of the entire project.

Currently, the project for the construction of the high-speed rail connection is ongoing on several sections which include: