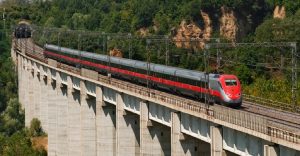 Systra won a design and build contract for a rail section on the Naples – Bari high-speed line. In a Design Joint Venture made with the engineering company SWS, Systra-Sotecni will carry out the detailed design for the doubling of the Frasso Telesino – Vitulano section, including the Telese – San Lorenzo and San Lorenzo – Vitulano lots of the high-speed line.

The section has a length of 19.2 km, comprising 14 bridges and viaducts, seven tunnels, three stops, four underpasses and two overpasses.

The section is designed to accommodate passenger trans running at a speed od 200 km/h and the freight trains, with a speed of 140 km/h.

“Our proposal for technical improvements was a major factor in being chosen for this assignment, followed by organisation of the design and construction activities and the schedule. We are well on the way to consolidating our position in the railway D&B sector in Italy,” Amedeo Aita Mari, Managing Director of Systra-Sotecni said.

The Design Joint Venture was chosen before the tender phase by the construction joint venture led by Ghella and composed of Itinera, Salcef and Coget, all of them main players on the Italian infrastructure market.

The Design Joint Venture is led by Systra (58%) and Systra-Sotecni and is responsible for the alignment, bridges and viaducts, stops, MEP, excluding tunnels, tracks, including the demolition of the existing line and construction of the new one, catenary system, electrical substations, signalling, the telecommunication systems and low voltage. SWS which holds 42% in the joint venture is responsible for tunnels, including MEP, geology, geotechnics, environmental studies, hydrology and hydraulics.

The project will be fully managed and executed using the BIM method for all disciplines from design to construction, another great challenge for our Italian team after the first BIM experience with the Napoli-Cancello section on the Napoli-Bari and the ongoing designs of the Red Line of Bologna Tramway, Genova Monorail and Messina tramway.

The Naples – Bari high-speed line is part of Italy’s high-speed rail programme, one of the country’s biggest railway investment initiatives ever. In September 2020, the European Investment Bank has allotted EUR 2 billion funding for this line.