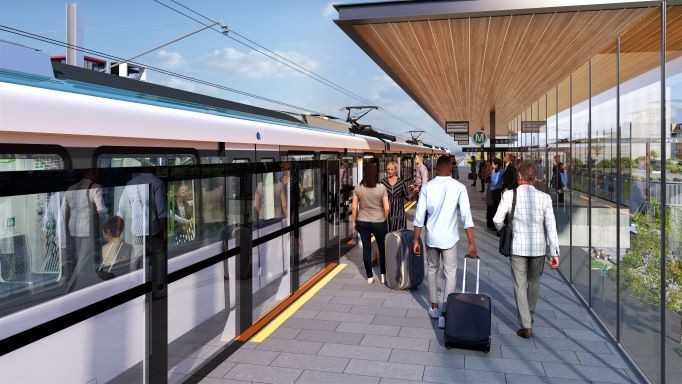 Parklife Metro will also operate and maintain the 23-km line for 15 years after it becomes operational.

Webuild’s stake worth approximately EUR 2.4 billion. The company has approximately a 78% stake in the joint-venture that will execute the civil works along with Siemens. It also has a 10% stake in the project company (which includes Plenary Group, Siemens Mobility and RATP Dev).

Siemens Mobility will deliver 12 automated, driverless 3-car metro trains, will be responsible for a purpose built depot, the digital rail infrastructure including signalling, electrification, telecoms and platform screen doors as well as system integration, testing and commissioning. The company will also complete the 15-year maintenance contract. Siemens Mobility will implement Railigent X mobility application suite for digital services to help gain valuable data insights in operation to enable greater reliability and availability for the assets. The Siemens Mobility portion of the contract is EUR 900 million.

Activities are already underway as part of the new metro project, including preparations at the future Aerotropolis station for tunnelling from the airport to the Aerotropolis site, which will commence in 2023.

Under the project, all the three major contracts for the Sydney Metro – Western Sydney Airport project have been awarded. The tunnelling contract was awarded in December 2021 to CPB Contractors and Ghella joint venture to build the new twin metro rail tunnels. In March 2022, the contract to deliver 10.6 km of elevated viaduct, earthworks for track formation, a rail bridge over the new M12 motorway, a rail bridge within the airport and associated works, was awarded to CPB Contractors and United Infrastructure Joint Venture.

Western Sydney Airport metro system will become operational when Western Sydney International is open for passenger services, Australian and NSW governments estimate. The new airport is forecast to have 10 million passengers by the early 2030s and will be Sydney’s first 24/7 airport. The city-shaping rail link will support access to the new Western Sydney Aerotropolis that will create approximately 200,000 new jobs, providing a major economic stimulus for the Western Sydney, New South Wales and national economies. The Western Sydney Airport project will be an expansion of Sydney Metro, improving services on the largest public transport network in the most populated city in the country. The line will support development in Western Sydney, with its construction creating thousands of jobs.