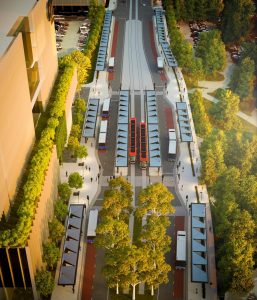 The Australian Government has announced a AUD 132.5 million (USD 103.7 million) funding for the construction of the first section of Canberra light rail Stage 2A.

The project involves the construction of a 1.7 km extension from the city to Woden and will extend the existing route by three stops Alinga Street through to Commonwealth Park. The construction works are expected to start in 2022. The double track section has wire-free track design and it will be operated by four new light rail vehicles.

An additional 2,500-3,000 passengers a day are expected in the first operating year.

“The Commonwealth’s support for the project is welcomed, and it follows in the footsteps of the financial support received for stage one of the ACT’s light rail network. The project is critical to the Territory’s Jobs and Economic Recovery plan, and I look forward to working with the Commonwealth on progressing the approvals for the entire stage 2 project,” ACT Chief Minister Andrew Barr said.

On February 5, the Federal Government granted the environmental approval for the construction of the new light rail line. The project will raise the London Circuit road level on the Commonwealth Avenue.

Canberra light rail network is now operating, with the Gungahlin to City route completed. The expansion of the light rail to Woden is performed within two phases which makes a complex project more focused, and easier to design. The connection between the city Commonwealth Park is part of the Stage 2A and from Commonwealth Park to Woden is to be constructed within the Stage 2B. Expanding on the existing light rail network will allow people to easily access major educational institutions, retail and entertainment precincts, major events and employment hubs through an integrated public transport network.