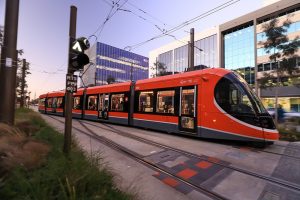 The Federal Government of Australia has granted the environmental approval for the extension of Canberra light rail network, the Stage 2A, from Alinga Street to Commonwealth Park, as the first component of finalising the north-south spine to Woden.

The project covers the construction of a 1.7 km LRT section with three new stations at City West, City South and Commonwealth Park.

The line will be wire-free track designed with 100% renewable energy to be used to power operations. Four new light rail vehicles will operate the new section starting 2024 when will move an extra 3,000 passengers daily within the first year of operations. The passengers will benefit an integrated ticketing system.

Under the project, the London Circuit will be raised which is crucial to enable the construction of the light rail Stage 2A construction and will improve the urban realm and pedestrian and cycling access between the CBD, City West, Acton and the Acton Waterfront. The project will raise the London Circuit road level on either side of Commonwealth Avenue, taking around two years to complete. It involves changing the current split-level, overpass-underpass configuration into a level intersection.

The construction is expected to start in the 2021-22 financial year.

The approval announcement comes as the Australian Capital Territory Government continues its work on the design of Stage 2 of light rail to Woden, with funding provided through the 2020-21 budget. The budget also allows for around AUD 1.3 million (USD 987 thousand) for feasibility studies to assess the benefits of extending light rail even further from Woden to Mawson. AUD 2.1 million (USD 1.6 million) will be invested on early works design to raise London Circuit.

In 2019, the city has inaugurated its first light rail line, providing a 12-km connection.