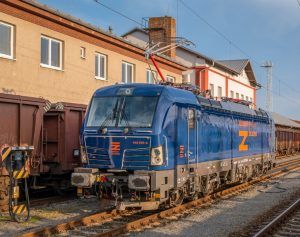 The Czech rail infrastructure manager SZ, ČD Cargo and Siemens have successfully completed the ETCS compatibility tests of Vectron locomotives equipped with the new control system which is gradually installed on the country’s rail network.

These locomotives, one of which is also part of the SZ fleet, are thus the first type of railway vehicles operated in the Czech Republic to take full advantage of ETCS – supervised driving.

“The successful completion of the compatibility tests has confirmed that we can make full use of ETCS on both at trackside and on board. For the Czech Railways, this is a crucial step, especially in the area of transport safety, energy savings and traffic flow,” Jiří Svoboda, the General Manager of SZ said.

They were tested on three rail lines (Břeclav – Česká Třebová – Kolín, Břeclav – Petrovice u Karviné and Praha – Olbramovice lines) which are equipped with the second and third generations of the ETCS L2 and L3 technology.

“To take full advantage of this system the vehicles equipped with an ETCS mobile part needed to run on the lines. I am pleased that Vectron locomotive fleet is the first in the Czech Republic to successfully pass demanding and complex tests and subsequently a compatibility tests,” said Roman Kokšal, the CEO of Siemens Mobility – Czech Republic.

“Vectron locomotive ETCS compatibility tests in the Czech Republic is a performance. Our ambition is to catch up with the stationary part as quickly as possible and to become increasingly involved in the verification operation of trains under the supervision of ETCS. This applies to both newly purchased traction vehicles already equipped with ETCS and those retrofitted,” David Jelínek, ČD Cargo’s ETCS expert explained.

In September 2021, Správa železnic ordered from Siemens Mobility a Vectron multi-system locomotive as part of its diagnostic vehicle fleet. The locomotive will be used for diagnostics of the domestic and foreign railway network, including the ETCS track side.It will also be used for towing own diagnostic cars, such as measuring cars on the railway superstructure, radio network or existing car for measuring traction lines.It will thus partially replace the services that the rail infrastructure manager has to lease from carriers.