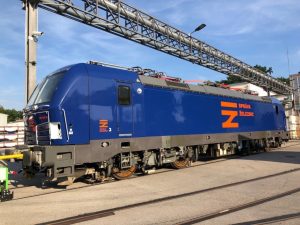 Správa železnic, the Czech rail infrastructure manager, and Siemens Mobility Czech Republic signed a contract for the supply of a Vectron multisystem locomotive which will be used for diagnostics on the railway network including the ETCS.

The electric locomotive will be delivered this autumn and it will be immediately used together with the existing diagnostic vehicles such as measuring vehicles for the superstructure, the radio network or the existing traction line measuring vehicle. It will also partially replace the performance of carriers that the Railway Administration has to lease.

The multisystem locomotive is equipped with ETCS on-board Level 2 Baseline 3 and is already approved for operation on the lines in the Czech Republic and abroad. The locomotive will also be equipped with SM-R and remote diagnostics system. This will allow the ETCS track-side tests to be carried out by separate test runs as well as by other vehicles.

“This is one of the first locomotives to be approved for operation under ETCS supervision on lines in the Czech Republic. We are gradually upgrading the system to other Vectron MS locomotives, which are now operated on lines, so that they can take full advantage of the possibilities of driving under ETCS in the future,” Roman Kokšal, the CEO of Siemens Mobility in the Czech Republic said.

The acquisition of the electric locomotive is part of a strategic project for a new measuring diagnostic track system for regular and acceptance measurements of both static and dynamic parameters of traction lines. The vehicle will complement the existing fleet of measuring rolling stock of the infrastructure manager and provides services for comprehensive diagnostics of railway infrastructure.

The Vectron multisystem locomotive for SZ will be manufactured at Siemens Mobility plant in Munich-Allach. The locomotive has a nominal traction power of 6400 kW and a maximum operating speed of 200 km/h. Due to its modular concept it will be handed over to the Railway Administration with equipment for operation in the Czech Republic, Germany, Austria, Poland, Slovakia and Hungary and can be retrofitted with systems for operation in other countries as well. It will thus be possible to carry out test and measuring runs also at cross border sections.