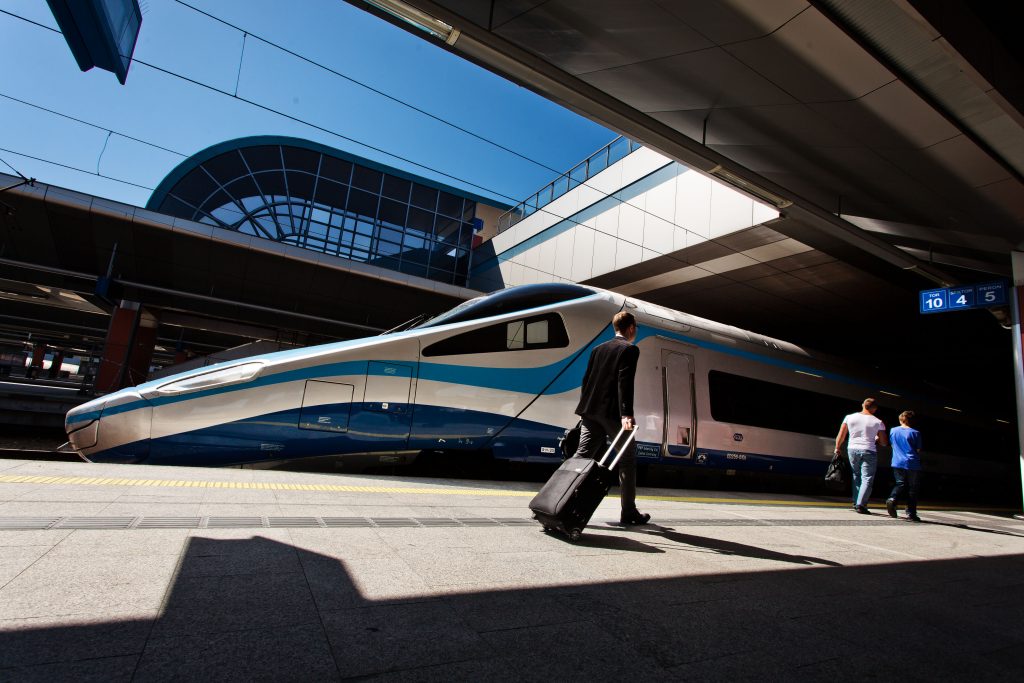 Centralny Port Komunikacyjny (CPK) has signed contracts for the design of Warsaw – Łódź high-speed railway, which is the first element of the new railway section of the first high-speed network and at the same time the first railway line in Poland. The contractors were selected under the largest framework contract for this type of service in Europe.

The design of the 140-km railway line has been divided into three tasks. The first task concerns the section from the capital city of Warsaw to line 11, i.e. the area behind the planned CPK transport hub (developed as part of a separate project). The second task covers a next section of the line up to the city of Łódź, while the third one aims to develop GSM-R radio communication network along the entire section.

The first task will be carried out by the consortium Biuro Projektów “Metroprojekt” together with Sud Architekt Polska, which has also worked with CPK on the design of the high-speed railway tunnel in Łódź. The consortium of Egis Poland, Egis Rail and Jaf-Geotechnika will be responsible for the second part of the investment. Biuro Projektów Komunikacyjnych in Poznań together with Biuro Projektów Kolejowych i Usług Inwestycyjnych and FONON will be responsible for the design of the GSM-R network. The total value of all tasks is over PLN 300 million net (EUR 63.9 million).

“We are entering the next phase of work. The scope includes preparation of pre-design and design documentation, with technical support and obtaining administrative decisions, including construction plan, construction permit, water permits, location decision and opinions on property values. Contractors have 17 months to implement the work, and in the case of radio network design, 3 months from the signing of the contracts,” Maciej Jagielski from the CPK’s Railway Sub-Programme Implementation Office said.

The new railway section between Warsaw and Łódź (without the CPK transport hub) is a part of railway line 85 and “spoke” no. 9. Together with a further section from Łódź to Wrocław and Poznań, the mentioned railway sections forms a ‘Y’ shaped line. In the first stage, trains will be able to reach speeds of up to 250 km/h (operational speed) with the target up to 350 km/h (design speed).

On the Warsaw – Łódź high-speed railway the journey times will be reduced by half, from currently 90 minutes to only 45 minutes. Travellers will be able to reach the CPK airport from Warsaw in around 15 minutes and from Łódź in around 30 minutes. Once the entire “Y” is built, a trip from Poznań to Warsaw by train will take less than 2 hours (instead of the current approx. 3 hours), and from Wrocław – 1 hour 55 minutes, twice as short as today.

Preparatory construction work is scheduled to start at the end of 2023. One of the contractors’ tasks is to obtain the necessary permits. Substantial construction work on the Warsaw–Łódź section will start in 2024, once planning permission has been obtained.

Centralny Port Komunikacyjny (CPK) is a new transport development programme in Poland – a strategic investment that is extremely important for the economic development of the country and the region and, of utmost importance, the security of Europe as a whole. It’s a great infrastructure project on an incredible scale to integrate air, rail, and road transportation quickly and efficiently. The CPK project includes, among others, rail investments: a transport hub at the airport in the centre of Poland and a network of new railway lines, mainly high speed, with a total length of nearly 2,000 km. This will make it possible to travel between Warsaw and Poland’s largest cities in no more than 2.5 hours. The first preparatory construction work on new CPK airport is planned to begin in 2023.