Centralny Port Komunikacyjny (CPK) will directly change the travel pattern between Warsaw and Łódź integrating the air, rail and road transport. Once the CPK is developed, it will also provide increased access and connectivity across the country and will also play a major role in Central and Eastern Europe which will be integrated with the transport system of Western Europe. The project covers the construction of the appropriate airport, of a new rail system based on high-speed concept and the modernisation of the existing rail infrastructure, as well as the construction of road infrastructure. 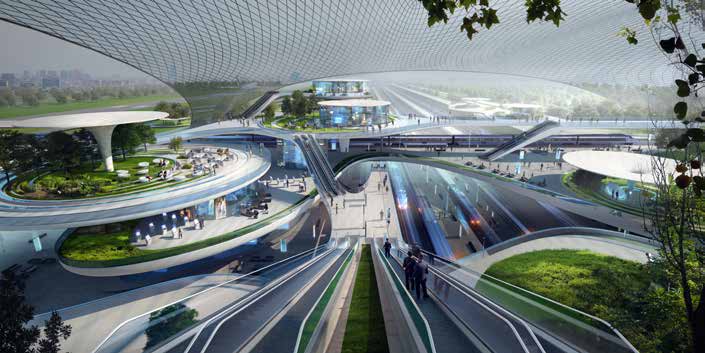 2027 and 2034 will irrevocably mark Poland’s transport system and economy defined by the Centralny Port Komunikacyjny (CPK), the newest, innovative and important project for the country and the Central and Eastern Europe.
These two specific years mean a new airport and a new rail system which will significantly reduce travel time and will allow connections from any part of Poland to CPK with a maximum 2h and 30 min average trip time.
In short, CPK will be an integrated transport system comprising air, rail and road transport which will be also part of the Trans-European Transport Network (TEN-T) and will offer increased access to all of Europe.
The CPK Airport will be the heart of the new rail system and its location near A2 motorway and halfway between Warsaw and Łódź will provide convenient infrastructure integration and increased access and capacity.
The project includes construction of the airport, almost 2,000 km of railways, 400 km of expressways and motorways as well as new airport city around the CPK Port, which will consist of a trade fair and congress facilities, conference, and office facilities.
The project’s CAPEX for the first phase with implementation schedule from 2021 to 2027 covers EUR 3 billion for preparation works which will be financed by the Polish Government until 2023. The entire project will be carried out with funds from the government, from the EU for the rail part of the CPK project, and from the private sector in the aviation component.
For the project, an application of EUR 1 billion from EU CEF funds has been submitted for infrastructure construction and further studies. By now, CPK has obtained more than PLN 120 million (EUR 25 million) in EU funds allotted for the preparatory stage. The European Union shares the belief that such complex railway investments first be “drawn on paper” and” that is why we won the CEF Connecting Europe competition,” CPK says.
CPK will be located between the two biggest cities in Poland – Warsaw and Lodz. The construction of the Centralny Port Komunikacyjny which includes the airport and high-speed rail system will provide a rapid development impulse to accelerate the urbanisation process. 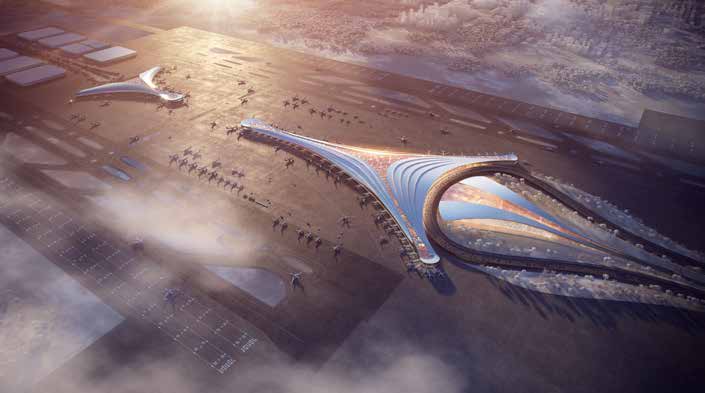 The airport provides the needed capacity

The new airport will be constructed on a 3,000 ha-surface and will be located 37 km west of Warsaw, in Baranów, which is characterised by a short distance from the Poland’s capital. It is expected that the airport will handle 40 million passengers per year in 2035 and 60 million passengers in 2055.
This component also includes an airport city based on the Aerotropolis concept around the Centralny Port Komunikacyjny region including fair, congress and conference facilities as well as offices. A large railway station integrated with the airport and individual railway stations scattered around Poland will allow the transport integration of the whole country.
The site will be used as a logistics and service centre, closely linked to the Centralny Port Komunikacyjny. Due to the proximity of the airport, railway station, A2 motorway – the main highway in the country, and the planned motorway ring road of Warsaw, the region will be accessible from every part of the country.
Apart from everything that the airport concept means for civil mobility, the CPK Airport will also have an additional role: to increase the security of Poland and Central and Eastern Europe. In times of armed conflict, airports, including civilian ones, are sometimes used for the transfer of military units, equipment, goods or humanitarian aid and also by supporting forces as well as rapid reaction forces. In military terminology, this mechanism is called ‘dual use’, which means dual purpose infrastructure. This way it can be used by NATO forces whenever necessary. “We need depth and redundancy in transport infrastructure. The CPK project will add a capability and capacity that no other node in Poland (or elsewhere in Eastern Europe) can match,” General Ben Hodges, former commander of US ground forces in Europe stated for Polish Press Agency. The airport could be used by heavy transport aircraft carrying troops and heavy combat equipment from American continent and Western European. Many experts say that Poland needs an airport with high capacity, capable of operating 24 hours a day and 7 days a week, adapted to handle cargo connected to motorways and the rail network and the planned Centralny Port Komunikacyjny will play a major role. Such infrastructure will contribute to increased operational mobility on NATO’s eastern flank.
According to IATA, the International Air Transport Association, if there is no investment in the Centralny Port Komunikacyjny, Poland would lose 850 million potential passengers by 2060. In 2024, Polish airports will return to pre-pandemic levels to around 50 million passengers and by 2040, the traffic will increase to around 100 million. IATA’s baseline scenario for Poland shows that in 2060, 140 million passengers will use country’s airports. Marcin Horała, the Deputy Minister of Infrastructure and the Government Plenipotentiary for the CPK says that “with the construction of the CPK Airport, we will attract around 850 million passengers by 2060. There could hardly be a more irrefutable argument for the construction of CPK.”
For the CPK Airport, IATA forecasts around 30 million passengers in its first full year of operation and the level of 40 million passengers is to be reached in 2035 and 50 million in 2044. At the end of the forecast – in 2060 – it predicts about 65 million in the baseline scenario, 48.5 million in the low scenario, and in the most optimistic scenario, CPK will serve about 72 million passengers. The capacity of the new greenfield airport between 2027 and 2035 is expected to be 40 million passengers per year and should increase to 50 million passengers in the next 7-10 years. By 2060, the capacity should reach 65 million passengers per year.
In addition to passenger traffic, IATA has prepared a cargo forecast. It takes into account the current situation of Chopin Airport (Warsaw), which handles less than 1% of the European air cargo. Currently as much as 62% of the air cargo from the Central and Eastern Europe, representing 1.8 million tonnes per year, is exported to airports in Western Europe. IATA forecasts that the CPK Airport could gain up to 20% market share in the Central and Eastern Europe in the short term. According to forecasts, without the construction of CPK, Poland would have missed out on 35 million tonnes of cargo by 2060.
The baseline scenario, the cargo forecast for CPK indicates 0.5 million tonnes in 2030, 1 million tonnes in 2035, up to 1.76 million at the end of the forecast period, i.e. in 2060. Thus, the CPK Airport has a chance to join the largest cargo hubs in Europe such as Frankfurt Airport which currently handles 2.1 million tonnes of cargo per year, Charles de Gaulle Airport in Paris with 2.1 million, and London Heathrow – 1.7 million tonnes.
CPK signed strategic agreements with partners from Korea. In February 2021 a contract was signed with Incheon airport for Strategic Consulting and the government of the Republic of Korea. Incheon Airport in Seoul acts as the strategic advisor of the entire investment. In 2021 CPK also signed a joint venture agreement, which is an unequivocal expression of the Koreans’ interest in obtaining equity in the CPK Airport.
CPK cooperates with several entities coming from South Korea, Great Britain, Spain, France, the United States, Germany, Czech Republic, Slovakia, Lithuania, Hungary, Latvia, Estonia, Finland, Sweden, and Japan that express interest in the Centralny Port Komunikacyjny investment. The company already has a cooperation agreement with the first three markets and also implemented a know-how exchange project with France.

Rail, at the heart of CPK system 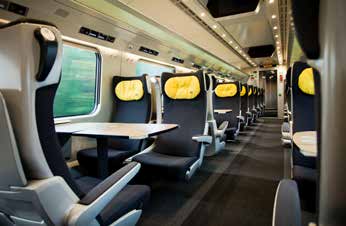 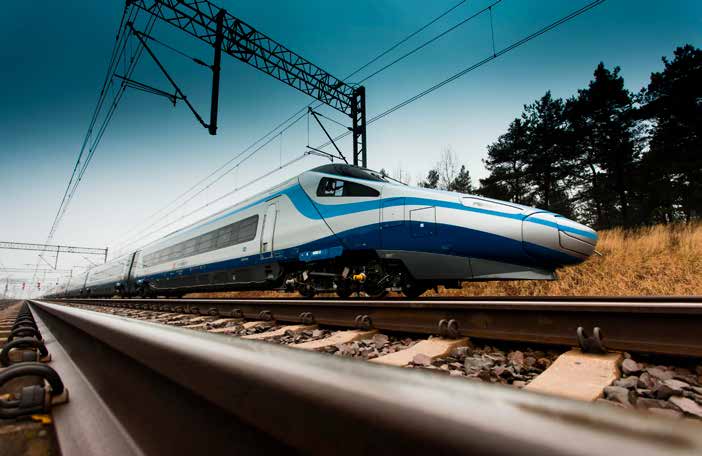 The new rail network will shorten the journey time to the new airport and Warsaw by up to 2.5 hours from the most of the main cities in Poland. Thanks to the Centralny Port Komunikacyjny, every Polish citizen will have access to the railway station within a 30 km radius.
Most of the CPK railway investments belong to the Trans-European Transport Network TEN-T, according to the TEN-T Regulation review. This network is an instrument for coordinating and ensuring the coherence and complementarity of infrastructure investments.
In addition, there are plans for cross-border railway connections. Preparatory work is already underway for the section connecting Poland with the Czech Republic There are also planned connections with Ukraine through Lviv and Kyiv, and a trip to Lithuania will be possible using the Rail Baltica line.
The airport and the first section of the railway system are scheduled to be opened at the end of 2027.