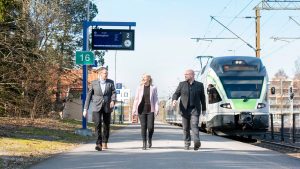 The Finnish Transport Infrastructure Agency and the consortium of Ramboll Finland and AFRY Finland signed a EUR 3.8 million agreement for the construction planning of the Espoo city line from Leppävaara station to the Tuomarila overpass, along the Helsinki-Turku railway connection.

The design is being carried out in the Espoo and Kauniainen cities in a dense urban environment.

The first phase of the project comprises the construction of a 14-km rail connection of the Global Project and its objective is to prepare the Construction Plan for upgrading the Espoo Rail Line to four-track line.

The project also involves the modernisation of five stations along the existing line, the improvement of the parking areas, as well as the delivery of barrier-free access to both the station platforms and the surrounding road network.

The consortium will also be responsible for the design of five new bridges, four stations, a new park facility in Kauniainen, next to the existing train station. Noise protection walls will be also installed between Leppävaara and the Tuomarila overpass to reduce the noise caused by train traffic nearby residents along the track.

The Espoo double-track near Helsinki, between Leppävaara and Kauklahti stations in Espoo, is one of the most challenging bottlenecks on the Helsinki-Turku rail section, as both commuter and long-distance trains operate on it, which affects the train speed and capacity.

The cities of Espoo and Kauniainen are to jointly implement a cycling corridor (Baana routes) along the Leppävaara – Kauklahti rail section which will bring new transport options and contribute to the development of active and sustainable mobility.

The construction of the new rail connection is expected to start this year and is scheduled to be completed in 2028. The project is implemented by the Finnish Transport Agency, the City of Espoo and the City of Kauniainen.

EUR 275 million is the estimated value of the project of which the Espoo city will cover 40 per cent of the costs, Kauniainen city 10 per cent. EUR 22 million is the eligible cost of the design works of which 50 per cent (EUR 11 million) will be provided by the European Commission under the CEF.

The Espoo rail project is part of the development of the public transport system in the Helsinki metropolitan area which will enable frequent and improved commuter train traffic in the Helsinki, Espoo and Kauniainen areas.

The Espoo city line will improve the service of commuter and long-distance train traffic, increase capacity.