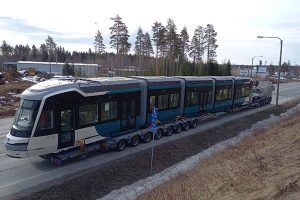 The tram was delivered by truck-mounted pallet and at the depot, the vehicle is being prepared for commissioning.

The bidirectional ForCity Smart Artic X54 tram will operate the future light rail line in Helsinki metropolitan area. The trams are 34 metres long, and if necessary, they can later be extended by about 10 metres depending on transport demand. The 100% low floor tram will enter tests in the city centre starting this summer. The user experience gained from the prototype tram will be used when finalising the series production solutions. At this point, passengers will also be able to explore the new tram.

The light rail vehicles are designed to be adapted to the tram network of the Finnish capital and will be compatible with the existing Arctic trams operating the central network. They are also environmentally friendly, energy efficient, convertible, barrier-free and easy to maintain.

In 2016, the Helsinki City Transport HKL exercised an option for 20 low-floor trams from Škoda Transportation, Finnish Transtech, for Helsinki city traffic and decided to acquire 29 trams for the new Raide-Jokeri. EUR 150 million was the total value of the contract under which 49 new modern vehicles are to operate the city’s tram network. HKL has also ordered 23 similar trams for the Crown Bridges tram line. 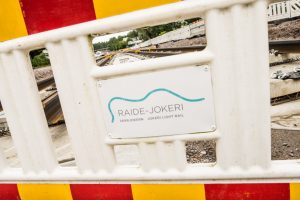 The Raide-Jokeri LRT, connecting Helsinki and Espoo will be 25 km long of which 16 km will be in Helsinki and the remaining 9 km in Espoo. The line will run along the northern edge of Patterimäki, partly going under it through a tunnel. The start of construction in Patterimäki Park has been delayed due to complaints. The Jokeri Light Rail Alliance will commence tree felling and the construction of the tunnel entrance on the eastern side of Patterimäki started in February 2021. The aim is to reduce the risk of further delays and additional costs. The construction of the eastern end of the tunnel will require more work than the western end.

About 44 per cent of the construction work of Jokeri Light Rail has already been completed, and 9,140 metres of tracks are laid.

Jokeri Light Rail will replace trunk bus line 550, which is the busiest bus line in the Helsinki region. The bus line is used by 40,000 passengers per day, and by 2030, Jokeri LRT will transport 91,000 pasengers.