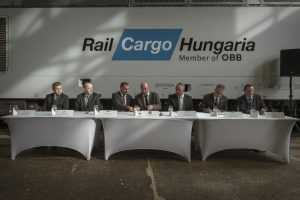 The Hungarian government will strengthen the competitiveness of single wagon freight transport by providing subsidies of HUF 30 billion (EUR 83.8 million) by 2025 which will support the modal shift from road to rail.

On November 5, the Ministry of Innovation and Technology has signed framework contracts for state support for single wagon transport and the payments will be made based on the performance. The first subsidies will be delivered to rail operators starting December.

In June 2021, Hungary has received from the European Commission (under the EU State Aid rules) the approval for this grant programme which includes rail infrastructure costs and any external costs.

Through this financially support, 10 – 12 million tonnes of goods from road transport will be shifted to rail and the companies which deliver these services will create safe delivery conditions for 2.3 million tonnes of dangerous goods annually.

Within the programme, the companies can apply for a non-refundable grant to provide single wagon services. Rail freight operators are expected to apply for a non-refundable subsidy of HUF 1 billion (EUR 2.8 million) in 2021 to maintain their single wagon transport services, while in the period between 2022 and 2025, HUF 4 billion (EUR 11.17 million) will be provided.

Without state intervention, this segment would be in great danger, Deputy Minister for Innovation and Technology Tamás Schanda explained. In the recent period, an operating loss of approximately HUF 6 billion (EUR 16.7 million) was recorded on an annual basis. “If this sector is not financially supported, about one-fifth of the goods transported by rail would been transported by 400,000 trucks a year, significantly increasing road traffic, and will impact the environmental. In addition, with the intervention, the sector will protect thousands of jobs,” Tamás Schanda said.

Róbert Homolya, the CEO of MÁV Zrt., said that one of the important commitments of the European Union is that by 2030, 30 per cent of road freight transit longer than 300 km should be shifted to rail transport. According to the European Smart Mobility strategy, rail freight volumes should increase by 50 per cent by 2030 and by 2050, the railways must double its freight volumes. In addition, Green Deal calls for a substantial part of the 75 per cent of inland freight carried today by road to be shifted to rail and inland waterways.

“It is important that customers really turn to the rail transport and the conditions to support the single wagon system also serve this purpose. Without the single wagon subsidy scheme, the sector would not be able to compete, as almost one fifth of the total rail freight transport is covered by this segment,” the CEO of MÁV said.

The single wagon services are essential for the economy as continues to ensure the supply and delivery of raw materials for 700 Hungarian companies, including strategic large enterprises and small and medium-sized enterprises.

For the freight railway undertakings, the aid also means maintaining the number of employees required to provide the service (currently 2,000 railway workers), reducing the competitive disadvantage vis-à-vis road transport and increasing the flexibility of customer service.

For the development of the rail freight sector, the government has recently announced it will spend more than HUF 26 billion (EUR 72.65 million) over the next five years to increase its competitiveness.

The authorities are committed to develop the rail transport sector in the next 10-15 years and one of the most important investments covers the modernisation and construction of Budapest – Belgrade railway line which will boost transport capacity and connectivity.

“The modernisation, which is just starting, covers the implementation of number of additional investments. This includes the rehabilitation and electrification of more than 13-km Szeged – Röszke railway line, the establishment of an innovative tram-train connection between Szeged and Hódmezővásárhely, and the renovation of the Röszke line,” László Palkovics said.