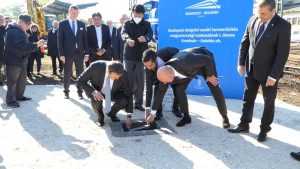 Hungary’s Minister of Innovation and Technology László Palkovics has launched the construction works for country’s section of the Belgrade – Budapest railway during an official visit of Serbia’s Minister of Transport Tomislav Momirovic.

To mark the beginning of the project, the two ministers laid a foundation stone and symbolically removed an older track at the Kiskunhalas station, where the official ceremony was held on October 15, 2021.

The construction covers the section between Šorokšar, in Budapest area and Kelebija, a village situated at the border with Serbia.

In Hungary, the project includes the modernisation of 152 km single track line and the construction of its double track covering a total track reconstruction of 339 km and the deployment of the ETCS Level 2 by 2025.

The line will be served by 13 stations of which five will be constructed and eight will be completely renovated and will benefit new car park, pedestrian underpasses, and lifts.

“I am extremely pleased to have the opportunity to be in this place, 137 years since the first train from Serbia, from Belgrade, left for Budapest. Today, we have the best relations between the Republic of Serbia and Hungary, and they are the result of a sincere friendship between the Prime Minister of Hungary, Viktor Orban, and the President of the Republic of Serbia, Aleksandar Vučić,” the Serbian Minister said.

The cooperation between the two countries “guarantees the economic, trade and traffic development” which resulted in the “construction of the most modern railway infrastructure between Budapest and Belgrade,” Momirovic explained.

The new railway line will reduce the travel time by 3.5 hours from currently 8 hours and will also provide efficient and connected services in the metropolitan areas of the two capitals. The trains will run at speeds of 160 to 200 km/h.

“With the development of Belgrade – Budapest railway line, the Hungarian national economy, the and the green transport technology will grow at the same time,while the Hungarian-Chinese and Hungarian-Serbian relations will also expand,” László Palkovics said.

The new rail between the two countries will also deliver a direct connection to the Port of Piraeus and will provide access to the Asian market. “Hungary will offer the fastest transport route by linking the Greek ports, the Far East and Western Europe,” the Hungarian official said.

In April 2020, the Hungarian Government and China’s Exim Bank signed a loan agreement for the implementation of the project which needs an investment of EUR 1.65 billion.

The railway line from Budapest to Belgrade will be 350 km long of which 166 km will be constructed in Hungary and 184 in Serbia.

At the beginning of 2020, Serbia will open the Belgrade – Novi Sad line, the first section of Belgrade – Budapest railway and in the coming months intends to intensify the construction works between Novi Sad and Subotica.

The total length of the high-speed railway route from the Belgrade Central Station to the state border with Hungary is 183.1 km. In Serbia, the project is being implemented on three subsections including Belgrade – Stara Pazova, Stara Pazova – Novi Sad and Novi Sad – Subotica – the state border with Hungary. This year, China Railway 11th Bureau and China Civil Engineering won a contract to perform civin engineering and infrastructure upgrade for two rail sections in Serbia.

The Budapest – Belgrade railway project is of strategic importance as it is part of the TEN-T and the Corridor X and it was funded by Chinese banks which delivered the financing as part of the Belt and Road Initiative.