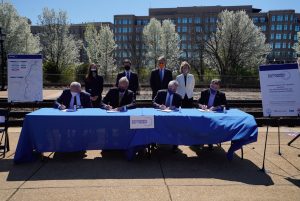 The Governor of Virginia, Ralph Northam, announced that the Commonwealth has finalised the agreements with Amtrak, CSX, and Virginia Railway Express, to advance construction of a new Long Bridge and transform passenger, commuter, and freight rail in Virginia. The governor launched a USD 3.7 billion investment to expand and improve the Virginia’s railway network which will create a vital connection in America’s national rail network between the Northeast and Southeast corridors.

“We have an unprecedented opportunity to build a 21st century rail system in Virginia and along the entire East Coast. This historic initiative will help get people and goods where they need to go more efficiently, reduce congestion and pollution, and create a more inclusive economy,” Governor Northam said.

The construction of a new Long Bridge on the Potomac River will double the rail capacity crossing the Commonwealth and neighboring state in Washington, D.C. The existing bridge is the only rail connection between Virginia and Washington D.C., creating the chokepoint for rail traffic between the Southeast and Northeast. “This project is estimated to bring nearly USD 6 billion annually in benefits to the region by 2040 and is a key component of Transforming Rail in Virginia,” said Congressman Don Beyer, U.S. Representative for Virginia’s Eighth Congressional District.

The agreements will support the construction of the USD 1.9 billion bridge over the Potomac River dedicated to passenger rail services, as well as the acquisition of 621 km (386 miles) of rail right-of-way and 359 km (223 miles) of track from CSX, and an investment of more than USD 1 billion in additional infrastructure improvements by the Commonwealth. These investments will allow Virginia to expand Amtrak and VRE services, create a pathway for the separation of freight and passenger rail in Virginia, and preserve future rail corridors.

In the next ten year, the partnership will double Virginia-supported Amtrak trains, will increase VRE commuter service by 60 per cent and will lay the foundation for a Southeast high-speed rail corridor. In addition, it will preserve an existing freight corridor between Doswell and Clifton Forge for future east-west passenger service and create the potential to expand rail to all parts of the Commonwealth.

The Commonwealth is bringing together Amtrak, state, and regional partners to fund the initiative. The USD 944 million commitment from Amtrak to be provided over the next decade is nearly 30 per cent of the cost of the improvements that will be delivered by the Transforming Rail in Virginia programme. In addition, the Commonwealth and Amtrak are entering into a long-term partnership for six new state-supported daily roundtrips, and Amtrak will be Virginia’s exclusive provider of intercity passenger rail service along the I-95 corridor for at least 30 years.