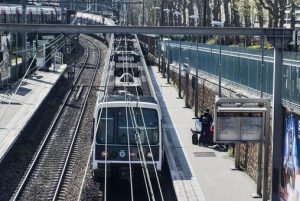 The French rail operators RATP and SNCF Voyageurs and Île‐de‐France Mobilités have reached an agreement with Alstom-Bombardier and CAF consortium for the construction of the MI20 train fleet for Paris RER Line B.

A meeting between RATP / SNCF Voyageurs and the Alstom-Bombardier / CAF consortium held on April 13, made it possible to confirm the consortium’s commitment to the execution of the contract and to initiate next steps in its implementation.

For the tender announced in 2018, Alstom and Bombardier Transportation – CAF consortium submitted their bids and in December 2020, the consortium was announced as the winner of the contract. Soon after the announcement, Alstom claimed at the Administrative Court of Paris (Tribunal Administratif de Paris) that the bidding process was irregular. The institution has suspended the train acquisition and following the process, in January the Court rejected Alstom’s appeal, paving the way for RATP and SNCF Voyageurs, to award the contract. On January 13, 2021, the contract was awarded to Bombardier / CAF consortium.

Following the completion of Bombardier Transportation acquisition, Alstom reviewed the technical and financial bid submitted by the consortium before announcing on February 3 that it has planned to renegotiate the contract. The highlighted irregularities concerned the gauge of the new trains that did not comply with the standards, the proposed bogies, the train development schedule, as well as the proposed value of the offer submitted by the consortium.

The tender covers the supply of 146 electric multiple units totalling EUR 2.56 billion, which is financed by the Île-de-France Mobilités. The train procurement is essential to modernise the RER B train fleet operating the second Europe’s busiest line, after the RER A.

146 electric multiple units will be manufactured for the suburban line operated by both RATP and SNCF and serving the French capital in northbound/southbound directions.

To improve the quality of service on RER Line B, the MI20 train fleet will replace the existing MI79 and MI84 type trainsets currently in operation, with delivery of the first train scheduled for the end of 2025.