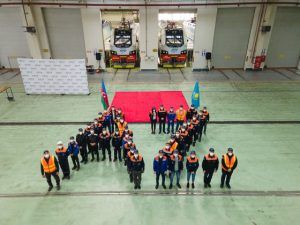 Alstom has delivered the 40th and the last Prima T8 AZ8A heavy freight locomotive to Azerbaijan Railways (ADY) which will operate on country’s rail network and also on international corridors.

For Alstom the shipment is of great importance as “this is our first export contract for Kazakhstan. Despite all the difficulties posed by the pandemic, we have been able to reach this milestone as a result of the commitment of our team,” Kanat Alpysbayev, Managing Director of Alstom in Western and Central Asia said.

The delivery is part of a contract signed with ADY in 2014 for the supply of 50 electric locomotives which includes 40 Prima T8 AZ8A heavy freight locomotives manufactured at Alstom’s EKZ joint venture in Nur-Sultan, Kazakhstan, which employs around 850 people and is working on supplying and maintaining the Prima electric locomotives ordered by KTZ and export markets, like Azerbaijan. Under the EUR 288 million contract, ADT has also ordered 10 Prima M4 AZ4A passenger locomotives produced in Belfort, France, which are also delivered.

In June 2021, Alstom has commissioned the first 7 Prima T8 AZ8A locomotives to ADY to operate on the East-West corridor of Azerbaijan, which has been converted from 3 kV DC to 25 kV AC.

The Prima T8 is one of the most powerful electric locomotives in the world. This model is a 25 tonne per axle two – section freight locomotive capable of towing up to 9,000 tonnes and running at 120 km/h, with installed continuous power of 8.8 Megawatts.

The Prima T8 AZ8A is designed to operate in temperatures ranging from -25°C to 50°C, requiring minimum maintenance. It also provides high reliability levels and low lifecycle costs thanks to its modular design.

The T8 AZ8A freight locomotive will provide transport services on the Trans-Caspian railway corridor which connects Asian and European markets. The corridor starts from Southeast Asia and China, crossing Kazakhstan, the Caspian sea, Azerbaijan and Georgia, and further to the European countries.