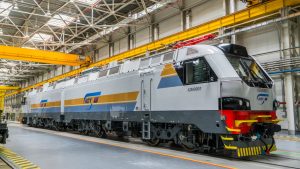 Azerbaijan Railways (ADY) received the first 7 Prima T8 freight locomotives from Alstom which will run on the main freight transit line which has recently been converted from 3 kV DC to 25 kV AC.

The Prima T8 AZ8A locomotives will be running initially on the “Silk Road” East-West corridor of Azerbaijan linking the Caspian Sea main ports to the Georgian border and later all across the country.

The Prima T8 is one of the most powerful electric locomotives in the world. This model is a 25 tonnes per axle two-section freight locomotive capable of towing up to 9,000 tonnes and running at a speed of 120 km/h. They are equipped with continuous power of 8.8 Megawatts.

The Prima T8 freight locomotives are designed to operate in temperatures ranging from -25°C to 50°C. They require minimum maintenance and provides high reliability levels and low lifecycle costs thanks to its modular design.

“Our locomotives play a key role in boosting the freight transportation capacity within Azerbaijan, furthermore they also contribute to the ambitious goals of the country to interconnect the neighboring countrie,” Guillaume Tritter, Managing Director of Alstom in Western and Central Asia said.

The delivery of the new locomotives is part of a EUR 288 million contract signed in 2014 with Alstom for the supply of 50 electric locomotives including 40 Prima T8 AZ8A heavy freight locomotives. They are being produced at Alstom’s joint venture EKZ in Nur-Sultan, Kazakhstan, and 10 Prima M4 AZ4A passenger locomotives which have been produced in Belfort, France, are already delivered to Azerbaijan.

The Electrovoz Kurastyru Zauyty (EKZ) factory which has an area of 27,522 square metres for manufacturing process is situated the Kazakh capital of Astana and is specialised in the development and construction of electric locomotives. The joint venture is the result of a strategic partnership between KTZ, Alstom, and Transmashholding (TMH).