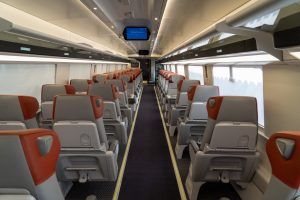 Amtrak and Alstom have presented the interior of Acela trainsets which will enter transport services in 2023 on the Northeast Corridor.

Elevating the travel experience, the new Acela offers enhancements in comfort, technology, innovation, and safety on Amtrak’s most environmentally sustainable fleet of trains to date.

The trains are manufactured in Hornell New York with 95% of components made in America, sourced from 250 suppliers in 27 states.

“Thanks to Hornell’s world class workers at Alstom, America is now in the fast lane for the high speed state of the art train system it has long needed. The new trains, which come built straight from the heart of New York’s Southern Tier, will transform Amtrak’s Northeast Corridor line, improving service, safety, and getting passengers to their destinations faster and more efficiently than ever before,” Senator Charles E. Schumer said.

In 2020 the first Acela train entered tests and the trains will provide transport services between Boston, New York, Philadelphia, Baltimore, Washington, DC, and other intermediate cities.

With free Wi-Fi, and power outlets at each seat, the train keeps passengers connected while travelling at speeds of up to 240 km/h.

In 2016, Alstom and Amtrak signed a USD 2.45 billion contract for the supply of 28 Acela trainsets to replace the existing express train fleet.

The new generation high-speed trainsets have a capacity of 286 passengers, representing a 30% increase compared to the existing fleet.

In addition, Amtrak is preparing the train facilities in Washington, D.C., Boston, and New York to accommodate the future high-speed trains. A USD 40 million upgrade contract was awarded to Skanska for the three maintenance facilities, that have been originally constructed by Skanska two decades ago.