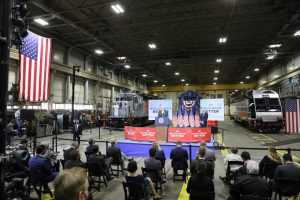 The US President Joe Biden and New Jersey Governor Phil Murphy have officially kicked off the construction of the new Portal North Bridge on October 25.

“The infrastructure bill is about rebuilding the arteries of America, and the Portal Bridge Project is showing why investments like this are so important. Since the Portal Bridge was built, it has become the busiest rail span in the entire Western Hemisphere. Today, we are moving forward on a new bridge so that it will be higher over the water, so it won’t need to open and close, and allow us to increase speed, safety, efficiency, and capacity. It’s going to make life a lot better for New Jersey’s commuters,” Joe Biden said at the ceremony.

The project is being implemented by NJ Tansit and Amtrak and will replace the 110-year-old rail bridge over the Hackensack River New Jersey with a higher bridge that will not have to open and close for river traffic.

“This is a great day for New Jersey and the entirety of the Northeast Corridor. The Portal North Bridge is the beginning of the largest critical infrastructure project in our nation, and with President Biden’s leadership, we are embarking on the path to completion of the Gateway Programme,” Governor Murphy said.

The Portal North Bridge project covers the construction of a 4 km double-track section on the Northeast Corridor and includes construction of retaining walls, deep foundations, concrete piers, structural steel bridge spans, rail systems, demolition of the existing bridge, and related incidental works. Construction is anticipated to take five years.
The new bridge is a modern two-track, high-level, fixed-span bridge that will improve service and capacity along this section of the Northeast Corridor. The new bridge will rise 50-feet over the Hackensack River and will allow marine traffic to pass underneath without interrupting rail traffic.

In January 2021, NJ Transit and the Federal Transit Administration (FTA) signed a Full Funding Grant Agreement which secured USD 766.5 million, paving the way for procurement and construction to begin on the roughly USD 1.8 billion project.

At the beginning of 2021, NJ Transit has initiated Invitation for Bid for the construction contract for the Portal North Bridge. The procurement was a two-step process, the initial step being the special pre-qualification of bidders. In May, the agency pre-qualified four bidders and conducted a pre-bid conference and Disadvantaged Business Enterprise outreach. Two of the pre-qualified bidders submitted proposals on September 2. Skanska/Traylor Bros Joint Venture of Queens, New York was deemed the lowest responsible and responsive bidder.

In October, the Governor and NJ Transit announced the approval of a USD 1.56 billion construction contract for the new rail bridge.

The Portal North Bridge, which is part of the larger Gateway Programme to double rail capacity between Newark and New York. It will greatly reduce gridlock caused by critical operation and maintenance issues of the existing 110-year-old swing bridge and improve service, reliability and capacity for rail travel between New Jersey and New York City.

Prior to the COVID-19 pandemic, the bridge carried more than 450 daily Amtrak and NJ Transit trains and 200,000 daily passengers over the Hackensack River, a critical link in the congested territory between Newark, NJ and Penn Station, New York. The two-track, moveable span is a major bottleneck and source of delay, particularly when the aging bridge malfunctions during opening and closing for maritime traffic.