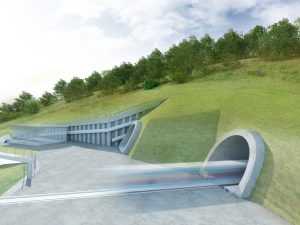 A EUR 80 million financing was approved by the European Commission through the Cohesion Fund for the construction of a tunnel and two viaducts part of the Divaca-Koper second track project.

EUR 1.2 billion is the total estimated value of the project, of which the European Investment Bank has approved EUR 250 million. The Connecting Europe Facility has provided a total EUR 153.36 million funding for the construction of the second track, of which EUR 109 million under the 2017 CEF Transport Blending call and EUR 44.33 million under the 2016 call. EUR 597.3 million was the total eligible costs of the project submitted to the two calls. In addition, EUR 14.19 million was provided under the 2014 CEF call for the bottleneck rehabilitation in the area of Bivje on the Divača–Koper railway line, that had an eligible cost of EUR 16.7 million.

In May, 2TDK, Slovenia’s state-owned company, responsible for the project, and NLB Development Bank Banja Luka signed a EUR 112.5 million agreement for the Divača-Koper second track.

The Divaca-Koper second track consists of the construction of a new 27.1 km line and because of difficult terrain, environmental constraints and more than 400 metres of altitude difference, the tunnel variant proved to be the most appropriate, with 75 % of the route in tunnels, with the longest tunnel spanning 6,714 metres. Under the project, 8 tunnels, two viaducts and one gallery will be constructed

2TDK has received 29 bids for the construction of Divača -Koper second track, a tender that was divided into two lots. For the Divača – Črni Kal section, 10 consortia out of 15 have been invited to submit their offer, and for the Črni Kal-Koper section, 10 teams out of 14 will enter the tendering procedure.

The importance of the second track is predominantly revealed in the international freight rail transport, as it implies a modern and high-capacity link between the Port of Koper and the Slovenian and wider European railway network.