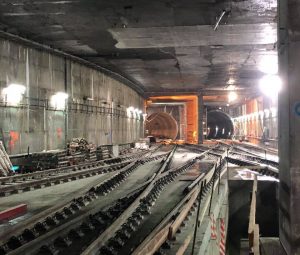 The Evaluation Committee of Metrorex, the Bucharest metro operator, selected a Turkish joint venture to design and perform the civil work construction for the Lot 1 of 1 Mai-Tokyo metro section.

RON 1.27 billion (EUR 257.79 million, VAT excluded) is the value of the contract awarded to the consortium comprising Alsim Alarko Sanayi Tesisleri ve Ticaret A.s. – Makyol Insaat Sanayi Turizm ve Ticaret A.S. Following the award criteria including the financial and technical proposal, the consortium obtained the highest score (of 99.06). Yuksel Project Uluslararasi A.Ş. was introduced by the consortium as the third supporting party that, in the qualification document has submitted a commitment regarding the technical and professional support of the bidder relating to the key personnel – the Design Manager and for the items 3 and 4 of the requirements regarding similar design experience – namely Form 13b filled on May 22, 2019.

After the evaluation process, the technical proposals which fulfilled the minimum requirements included in the bidding documents were submitted by four joint ventures. After the assessment of the financial proposals, the bids from three consortia have been designated to enter next phase of the process.

Excepting the winner, the remaining two competitors were:

Previously, following the evaluation of the financial proposals, the offer submitted by the Esta Construction LLC Association – Doguş Inşaat ve Ticaret A.Ş. had been declared by the Evaluation Committee as unacceptable and non-compliant with the requirements.

1 Mai-Tokyo metro section which will be served by 7 stations, is part of the metro Line 6 which will be built from 1 Mai station (situated on the Line 4) to the Otopeni Airport. The Line 6 will have a total length of 14.2 km and will have 12 stations.

In September, Bucharest has opened the new Line 5 with a length of 7 km served by 10 stations and one depot.

The Bucharest metro network has a total length of 78 km with 63 metro stations.