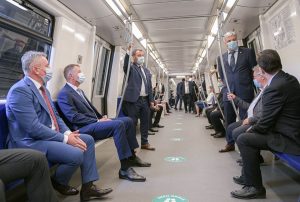 The Romanian President, Klaus Iohannis, together with the Prime Minister Ludovic Orban, the Minister of Transport, Lucian Bode, and the Director General of Metrorex, Gabriel Mocanu, have opened the Bucharest metro Line 5 between Raul Doamnei and Eroilor, including the Valea Ialomitei branch. The commercial operation on the metro section offers transport connection between the south-west part of the capital, in Drumul Taberei district and the city centre.

“I congratulate all parties involved within this important project. It is a great achievement and it is the largest transport infrastructure in Bucharest and in Romania performed during the last 30 years. This achievement contributes to the improvement of the quality of life and it is extremely important to continue transport infrastructure investments. As the passenger mobility is at high demand, the government must speed up the development of transport projects,” Klaus Iohannis said at the opening ceremony.

The line has a length of 7 km served by 10 stations and one depot (Valea Iolomitei) bringing the metro system to 78 km and 63 metro stations.

“It’s an honor to open this metro line which is extremely important for Bucharest as well as for the citizens living in Drumul Taberei district. All the further works to expand the metro system will be accelerated as the government considers the transport infrastructure development as a high priority,” Ludovic Orban stated.

The trains will run at a 2-minute frequency which will increase the passengers’ comfort and will reduce the travel time between Valea Ialomitei, Raul Doamnei and Eroilor from 32 minutes to 12 minutes.

The construction works started in November 2011 and the opening of the Line 5 first section was delayed by five years due to financial and political issues.