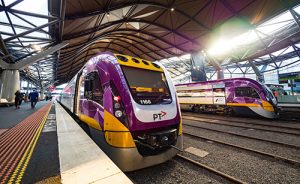 The Victorian Government has released the final VLocity train design which will provide more comfortable and more reliable transport services on the North East line.

Bombardier will begin manufacturing the trains later this year at its facility in Dandenong, boosting the economy and supporting 500 local jobs.

“These new trains will be the first VLocitys to run on standard gauge tracks on Victoria’s regional network and will provide North East line passengers with a more comfortable and reliable train journey. We’ll be making these new trains in Dandenong – boosting the economy and supporting hundreds of local jobs in the process,” said the Minister for Public Transport, Melissa Horne.

The trains will be the first VLocity trains to run on standard gauge tracks on Victoria’s regional network.

The VLocity trains will run from Melbourne to Albury/Wodonga for the first time after the completion of the AUD 235 million (USD 154.3 million) North East Line upgrade and a rigorous testing programme. John Holland Group has been appointed to deliver major works on the North East Line upgrade. The project is expected to be completed by mid-2021.

The North East Line upgrade will improve ride comfort and make services more reliable by upgrading the track and addressing the main causes of delays.

The new VLocity trains are part of the government’s AUD 340 million (USD 223.2 million) investment committed in the last year’s budget for new trains to meet increased demand across the regional network.

Last year, the Department of Transport, V/Line and train manufacturer Bombardier met with key community representatives from North East Victoria to help design the first new VLocity trains. The participants provided the train design team with important feedback on their needs for long-haul journeys, including accessibility features and how best to allocate space for seats, bikes and luggage. The feedback has been used to design modern, comfortable train interiors that are accessible and meet the needs of passengers on the North East line.