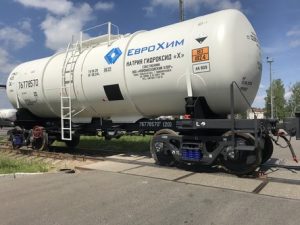 The 15-6900-01 tank car model, which will be added to the Novomoskovski Khlor fleet, is equipped with bogies allowing a 25-tonne axle load.

The detachable joints of the hatch covers have sealing elements made of fluoropolymers, a modern material that is resistant to friction and the wearing effects of hazardous materials. Thanks to the corrosion-resistant tank, the car can transport a wide range of chemical products while preventing risk to service personnel and eliminating any environmental impact of transporting hazardous freights.

“Following other EuroChem companies, we have taken the decision to purchase 18 UWC-produced cars for transporting sodium hydroxide, given the strong operational results they have shown both at enterprises belonging to the Group and on the market more broadly,” Ivan Ruban, CEO at Novomoskovski Khlor said.

The Tikhvin-produced stainless steel tank cars have a volume of 54.5 m3 with a load capacity of up to 76.5 tonnes. The tank car can be loaded with up to 8.5 tonnes of additional freight compared with standard models available on the market.

This model of tank car has an increased maintenance interval of up to 1 million km, or eight years. Standard models are sent for their first depot repair after running 210,000 km, or two years after construction, with subsequent repairs carried out every two years. The service life of the Tikhvin-produced 15-6900-01 model is 32 years.

With EuroChem, UWC has signed this year a contract for the supply of a batch of 15-6901 model tank cars which will be delivered by the end of 2020 to Novomoskovskiy Azot for concentrated nitric acid transport. Also, in April, with EvroKhim, part of EuroChem, a contract was signed for the delivery of 14 model 15-6901 tank wagons mounted on the 25 tonne-axle-load. They will be delivered to Azot, part of EvroKhim Group for concentrated nitric acid transport.