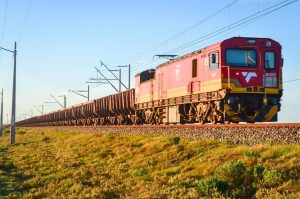 Transnet has been impacted by the phased lockdowns necessitated by the Covid-19 pandemic.

Lower demand in rail transport, container and petroleum volumes, on the back of limited economic activity, saw a decrease in Transnet revenue for the year ended 30 September 2020.

For this half – year period, the company reported R32 billion (EUR 1.75 billion) in revenue, down by 17.3% when compared to the same period in the previous year.

The general slowdown in economic activity saw a decline in performance of key sectors, including mining and manufacturing. This resulted in the decline of the rail transport by 16.4%, and a 20.7% decrease in port volumes for the period, when compared to the similar period in the previous year.

The bulk terminals were operating at reduced capacity during the initial hard lockdown, which weighed heavily on the exports of iron ore, manganese and chrome. During the same period container terminals were equally impacted.

After the initial hard lockdown, output was adversely impacted by regulations that prohibited mines from operating at full capacity in the interest of ‘flattening the curve’ and protecting the safety of workers.

The port volumes were also impacted by the reduced number of employees at work, due to the effects of positive COVID-19 cases, whilst pipeline volumes were significantly impacted by the total shutdown of airports, imposed travel restrictions, and the negative impact of fuel theft incidents. As restrictions began to ease and demand rebounded, Transnet experienced month-to-month improvements in performance across key indicators.

During this period the company supported the economy by focusing operations on moving essential cargo, decongesting the ports, operationalising container terminals and ports as well as essential rail corridors.

Transnet’s costs are largely fixed, which resulted in an EBIDTA of R 9.8 billion (EUR 534.3 million), a reduction of 47.3% compared to the prior reporting period. The closure of construction sites and disruptions in procurement supply chains during Level Five of the lockdown resulted in a decline in maintenance with capital investments reduced to R4.9 billion (EUR 267.17 million).

Transnet’s gearing ratio at 48.7% and rolling cash interest cover, including working capital changes at 2.5 times, remained within the triggers in loan covenants.

The company started to see improvements in performance in the second half of the year, as a result of growing demand and a rebound in economic activity. As a second wave of the pandemic emerges, Transnet will continue to focus its attention on ensuring its employees operate in a safe environment, whilst delivering to its customers.