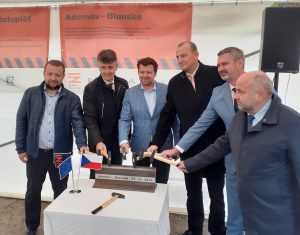 CZK 5.83 billion (EUR 230.89 million) is the total value of the three contracts signed on October 21, which are co-financed by the European Investment Bank and the European Union through the Connecting Europe Facility 2 (CEF 2).

The first project covers the modernisation of two rail sections and the existing stations along the Brno – Blansko line, as well as the reconstruction of Adamov station.

The first two projects are co-financed by a loan from the European Investment Bank (EIB), and under the project on the Reconstruction of Platforms at Adamov Railway Station is proposed for co-financing by the European Union from the Connecting Europe Facility (CEF 2).

The projects will “increase the speed of trains and ensure higher safety and reliability of operation. Passengers will then welcome barrier-free access to the platforms in Adamov and at the newly arranged stops,” Jiří Svoboda, the General Manager of SŽ said.

The works will stop the rail traffic on the Brno – Blansko section for one year starting middle of December and the passenger trains will be replaced by buses.

The Brno-Maloměřice St. 6 – Adamov project envisages a complete reconstruction of the railway superstructure and partly also the railway substructure, the construction of a new Svitava branch and the necessary modifications to the Bílovice nad Svitavou and Babice nad Svitavou stops. A CZK 2.4 billion (EUR 95 million) contract was signed with Malada consortium comprising Subterra, Strabag Rail and Elektrizace železnic Praha. As part of the investment, the railway superstructure of both tracks between the Brno-Maloměřice and Adamov stations will be reconstructed. The selected bridges, all four tunnels, retaining and frame walls and adjacent rock slopes will be restored, as well as several line speed dips will be removed. Railway stops will be rebuilt to meet the requirements for the movement of people with reduced mobility and orientation. In Bílovice nad Svitavou, a new underpass under the tracks will be created, which will shorten the access from the car park to the platform. At the same time, shelters for passengers are being repaired.

At Adamov railway station, the platforms will be reconstructed and two island platforms will be constructed providing access from the new footbridge over the entire track. The project will be implemented by Adamov consortium comprising Swietelsky Rail CZ and Elektrizace železnic Praha under a CZK 834 million (EUR 33 million) contract. The island platforms will be fully barrier-free, thanks to the lifts from the newly built footbridge. It will also be equipped with stairs, at the same time providing a connection to the other side of the track to Hybešová Street. The check-in areas for passengers will also undergo reconstruction, and the project also includes the construction of a car park with a capacity of 30 vehicles. The extension of the third station track will then allow the handling of freight trains with a length of 740 meters.

On the Adamov – Blansko project, SŽ signed a CKZ 2.6 billion (EUR 102.9 million) contract with AdaBla consortium created by OHL ŽS, Firesta-Fišer, and Tramo Rail. The project includes the complete reconstruction of the railway superstructure and partly of the substructure on the section and five tunnels will be rehabilitated. The information, radio and camera systems will be reconstructed, and modifications to the signalling and control system as well as to the high-current technologies will be made. During the construction, numerous rocky slopes affecting the safety of railway traffic will be stabilized. The project is funded by a EIB loan under the CEF Blending instrument.

All the rail construction projects are expected to be completed by 2023 when regional and interstate travel time will be reduced, and passengers will benefit increased safety and comfort.