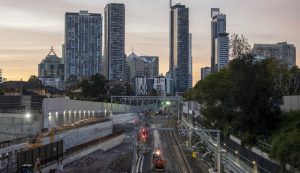 Construction works have begun for Metro North West Line, known as the Sydney Northern Connection, on 5 August at Chatswood, where Sydney Metro will be extended as part of the City & Southwest project.

The construction of the metro line is being done within the existing railway corridor while minimising impacts to train services on the T1 North Shore line.

The excavators have already moved 330 tonnes of soil and piling rigs drilled 34 holes, each up to eight metres deep. This foundation work will help create the ramp-like structure for metro trains to enter and exit the new twin metro tunnels at Chatswood.

About 7,500 tonnes of material will be excavated and a section of the existing suburban railway line will be re-positioned to create the structure, which is expected to link into the tunnels in 2022.

The new metro section, together with the City & Southwest metro line will create a metro system through Sydney Harbour underground, beyond to the south west. Using five tunnel boring machines, tunnelling finished in early 2020 on new 15.5-kilometre twin railway tunnels between the end of Sydney Metro Northwest at Chatswood and Sydenham.

When complete, the Sydney Northern Connection will create a seamless metro railway journey from Tallawong under the Harbour, through the city and beyond to Bankstown in 2024.

The project is part of the 36-km Sydney Metro Northwest line which entered transport services in May 2019. More than 20 million passengers have been transported since the opening of the metro line which is operated by a fleet of 22 driverless trains.

In 2024, Sydney will have 31 metro railway stations and a 66 km metro system, revolutionising the way Australia’s biggest city travels. The Sydney metro projects, which includes new metro lines, signalling and infrastructure upgrades across the existing network, will increase the capacity of train services across Sydney from about 120 an hour today, to up to 200 services an hour when completed.