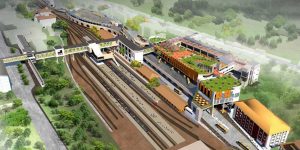 The Government of Sri Lanka and the World Bank signed a USD 69.33 million loan agreement for the development of the Kandy multimodal transport terminal (KMTT) which will develop the Good Shed terminal in Kandy.

Situated in the city centre, the new hub will provide increased access to the railway station, to the bus system and will also offer increased safety for the pedestrian traffic.

Currently, the Good Shed terminal lacks the critical infrastructure, such as adequately planned bus bays, parking areas for buses, waiting and queuing areas for passengers, adequate sanitation facilities, and centralised ticket and information counters, needed to accommodate the high volume of bus and passenger traffic. The lack of segregation of bus and pedestrian movement around the area poses significant safety risks for pedestrians. Lack of safe walking paths and pedestrian-friendly infrastructure has added to the traffic congestion and has created safety risks.

“Kandy will benefit significantly from a well-planned urban transport network that enhances accessibility to and from the city, efficient mobility within the city region, and its attractiveness as a tourist destination. The project is also critical for the city’s post-COVID economic recovery because it will create many short-term employment opportunities and address pandemic-risk in the design and modernisation,” Faris Hadad-Zervos, the World Bank Country Director for Maldives, Nepal and Sri Lanka. 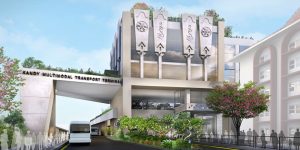 KMTT will eliminate the spatial scattering of the three existing bus terminals – Good-shed, Clock-tower and Torrington by bringing all existing terminal operations under one roof at Good-shed area of nearly three acres of land adjacent to Kandy railway station. The terminal facility spanning over three levels, connected through an underground passageway and an overhead Skywalk.

The new terminal will handle 330,000 passenger per day with over 5000 bus trips from mainly from 3 bus corridors. There will be IT based Terminal Operating system to control bus operation as well as to provide information to passengers with respect to time of departure location of respective bus bay.

The total project cost is USD 69.33 million, with USD 64.33 million provided through an International Development Association (IDA) concessional credit with maturity of 30 years and a 5-year grace period. The remaining USD 5 million is provided through an IDA non-concessional credit with maturity of 10 years and 5-year grace period.

Kandy is the capital city of the Central Province of Sri Lanka and is jor tourist attraction and was declared a UNESCO World Heritage Site in 1988. Kandy’s central location, with road access to all other regions of the island, offers it the potential to become a residential and commercial hub. On a weekday, nearly 389,000 commuters come into the city by bus or rail for education, employment and tourism-related purposes.