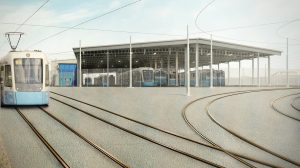 Sweden’s Region Västra Götaland, Västfastigheter, and Skanska signed a contract for the construction of Hisingen tram depot in Gothenburg. SEK 874 million (EUR 81.54 million) is the value of the contract under which the second phase of the project will be implemented.

“It is a great news that we can start the stage two of the project. Getting a depot for trams on site at Hisingen is an important part of the work to develop the urban rail public transport in Gothenburg,” Västfastigheter’s project manager, Anna Rick, said.

Currently, the depot consists of a service building and parking spaces that were completed in June 2020. The second stage of the project includes the construction of two buildings of which one will be designed for operation and one will be a workshop hall. The operational building contains space for service and deployment of the trams together with rooms for staff. In the workshop will have eight workshop spaces a hall there will be room for maintenance and repair, and rooms for administration and staff.

Skanska is also building the track system in and between the two buildings.

The depot is being built on a 100,000 square meter area on Hisingen.

“The need for additional capacity is great and increases as more new trams are put into service. The tram depot plays an important role because it is designed allow longer trams than today,” Jonas Nordin, manager for community properties for public transport said.

The tram depot in Gothenburg is essential for authorities’ long-term effort to strengthen the public transport in the region. It will offer possibilities to handle the future expansion of the tram operations and it is a welcome addition to the already existing depots in the region.

The construction is scheduled to start at the end of 2020 and will be completed by the end of February 2024.

Currently, there are three tram depots in Gothenburg.