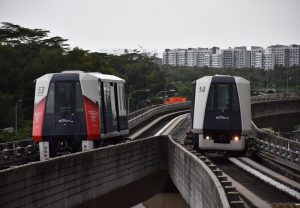 Singapore’s Land Transport Authority announced it will acquire 17 two-car trains to boost the capacity on the Sengkang-Punggol LRT (SPLRT).

This project will better serve the residents and meets long-term public transport demand in Sengkang and Punggol towns. This will double the number of two-car trains in the SPLRT fleet, which currently comprises of 16 two-car trains and 25 one-car trains.

The new train cars are expected to be delivered progressively from 2024 to 2027.

To increase stabling capacity and create more space for maintenance facilities, the existing 3.5-hectare SPLRT depot will be expanded to 11.1 hectares. Situated above the North East Line’s depot in Sengkang, the expanded SPLRT depot will include a new train stabling area and a new maintenance workshop. Two new reception tracks will also be constructed to shorten the train launching time.

As part of the depot expansion project, the SPLRT’s power supply systems will also be enhanced to support the operations of the additional trains. In addition, three new traction power stations will be added to the existing five for improved traction power.

Depot expansion works are expected to commence by the end of the year and be completed by 2027.

The Sengkang LRT, which links the area to the town centre, Sengkang MRT station on the North East Line, and the Sengkang bus interchange has been opened in 2003. The line serves 14 stations across two loops.

The Punggol LRT was opened in 2005 and provides transport connections from the residential areas to Punggol MRT station on the North East Line and the Punggol bus interchange. The trains run along two loops and currently serve 14 stations.

The two light rail lines’ systems were upgraded from one-car to two-car operations in 2016, to meet the growing transport needs of the communities they serve.