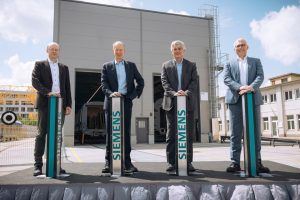 Siemens Mobility has successfully put into operation the new double-track train formation hall at its business location in Vienna, one year after it has announced a EUR 12 million investment to modernise the site.

Aside from the erection of the hall, efforts are already underway to drive digitalisation and robotics further. Two new robot units are to be constructed and the machinery on operation will be digitally networked meaning that the computer simulations and the production of the vehicles will be significantly simplified. The manufacturing processes are being optimised by means of several detailed initiatives.

This package of measures significantly increases the competitiveness of the Viennese business location and of Siemens Mobility in its entirety.

The groundbreaking ceremony, attended by regional politicians, took place in Spring 2021. The subsequent construction was executed during standard operation.

The new train formation hall will primarily improve the production options for metros developed and manufactured in Vienna. Furthermore, it can also be used for other projects, such as for example from the field of coaches.

The double-track hall and the new outdoor track are directly connected to the Austrian railway network.

Individual cars will in future be assembled to trains directly in the plant, will undergo on-site static testing and will then be transported to other locations via the environmentally friendly rail network for dynamic testing. In the past cars had to be individually transported by means of multiple trucks. The modernisation of the plant is therefore also a significant contribution for more sustainability, since another significant volume of CO2 emissions will be reduced.

At its plant in Vienna, Siemens Mobility primarily manufactures passenger coaches and metros, such as the night trains for the Austrian railway company ÖBB or metros for Vienna, Munich, Riyadh or Bangkok. Featuring the HQ for metros as well as its own engineering department, the Viennese business location of the company employs a staff of around 1,400 and trains numerous apprentices.