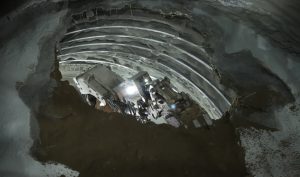 Russian Railways has completed the Cortanovci rail tunnel excavation works for the right tube which is situated on Stara Pazova-Novi Sad railway line. It is the first phase of the construction of 1086 meters long bore.

The Cortanovci tunnel consists of two parallel single-track tunnels with a total length of over 2.2 km on the Stara-Pazova-Novi Sad railway line, currently under construction.

The tunnel route is laid in difficult mining and geological conditions, in flooded soils. The tunneling was carried out simultaneously from the northern and southern portals by a special mountain method for weak soils. During the tunneling, more than 190 thousand cubic meters of rock were brought to the surface.
A completion of tunneling in the left bore is scheduled for June 2020. The readiness of this large-scale construction is 86%.

The commissioning of the tunnel is planned for November 2021.

The Cortanovci rail tunnel is one of the largest infrastructure projects in Serbia, with works being in place in the last 2 years. 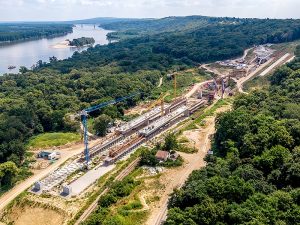 In Cortanovci, RZD International is constructing a 3 km double track viaduct in the floodplain of the Danube river. To date, installation works on all 103 piers and 90 of 118 spans have been completed. The total viaduct readiness has reached 91%.

The 40.5 km Stara Pazova – Novi Sad is reconstructed by RZD International and is part of the Belgrade – Budapest railway line which will allow trains to run at speeds of 200 km/h.

In January 2019, RZD International and Serbian Railways signed a contract for this project, including the construction of the Integrated Traffic Control Center which will be responsible for the management of Serbia’s railway traffic.

The contracts signed by the two sides also includes the construction and material procurement for the second stage of the reconstruction, modernisation and construction of the double-track railway for the Stara Pazova – Novi Sad line.

In compliance with another article of the document RZD International will draft a project for the reconstruction and modernisation of the 210 km long railway line connecting Valjevo – Vrbnica – border  with Montenegro.