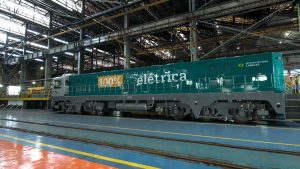 Vale, a Brazilian operator, has received a second battery-electric locomotive, as part of its strategy to accelerate the use of technologies that favor renewable sources. Its batteries, made of lithium, have a

storage capacity of 1000 kWh, with autonomy to operate up to 10 hours without stops for recharging.

The battery-electric locomotive will go to the terminal’s locomotive workshop, where it will stay for 90 days for system verification and testing. The first test in the switchyard is scheduled for July.

The CRRC locomotive is part of Vale’s strategy to electrify its mine and railway equipment. The two areas account for 25% of the company’s direct carbon emissions, the so-called scope 1. In 2019, Vale announced the goal of zeroing its Scope 1 and 2 net emissions, relating to electricity consumption, by 2050. To achieve its goal, the company is investing between USD 4 billion and USD 6 billion.

Currently, Vale owns a fleet of 490 diesel locomotives which are used to transport iron ore. In July 2020, Vale has received at Vitória-Minas Railway (EFVM) its first electric locomotive from Progress Rail.

“As happened in Espírito Santo on the Vitória-Minas Railway, our strategy is to test it in switchyard and then evaluate the possibility of re-adapting it as part of the subsequent strategy of using electric locomotives on the main line of the railway,” Gustavo Bastos, the executive manager of the Ferrous Center of Excellence, Technology and Innovation said.

The two electric locomotives are part of Powershift, a programme initiated by Vale to meet the company’s challenge of zeroing scope 1 and 2 carbon emissions. In addition to locomotives, the programme has also carried out tests with electrical equipment in underground mines in Canada.

Vale’s operational equipment electrification strategy also includes a partnership with BHP and Rio Tinto. In 2021, the three companies, together with another 17 mining companies, launched the “Charge On Challenge” initiative calling entrepreneurs to develop and implement solutions for electrifying large trucks used in mines.