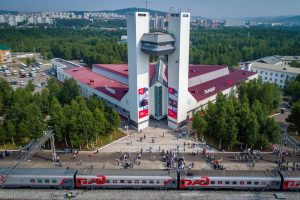 The Russian Government Commission on Digital Development and the Use of Information Technologies has approved the development of a roadmap for quantum communications for which Russian Railways jointly elaborated a strategy with leading experts and scientific organisations.

The measures planned under the roadmap include the creation of special funds to provide support to new projects and the introduction of ready-made technologies, certification centres and laboratories, the preparation of proposals for changing the regulatory framework, and training highly qualified personnel. It is also planned to develop educational and training programmes, including online education in the field of quantum communications, as well as to attract the best domestic and foreign experts.

One of the first pilot projects will be the construction of an 800-km backbone quantum network between Moscow and St. Petersburg that will enable the testing and approval of technologies and network architecture and the resolution of issues regarding equipment standardisation and certification, as well as the construction of a model for cooperation between developers, integrators, telecommunications operators and end users.

“Information transfer technologies based on the laws of quantum physics provide a fundamentally new level of information infrastructure security. Our task as a leading company in the field of quantum communications is to implement the existing scientific basis and technical solutions in specific projects, in the training of highly qualified personnel and the development of the commercial market for quantum communications,” said Sergei Kobzev, Deputy Managing Director and Chief Engineer of Russian Railways.

RZD’s infrastructure has over 75,000 km of fibre-optic networks and its own communication systems across the country. “By integrating our capabilities with the efforts of market participants and regulators, we will be able to build a model for cooperation from basic scientific developments to end-use applications,” Kobzev explained.

The Russian Railways’ roadmap for quantum communications is the second strategic document on quantum technologies to be approved within the framework of the Digital Technologies federal project.

“Today Russia has every chance of developing competencies in this area and creating its own competitive quantum technologies that will be on a par with world leaders,” Maxim Parshin, the Deputy Minister of Digital Development, Communications and Mass Media said.