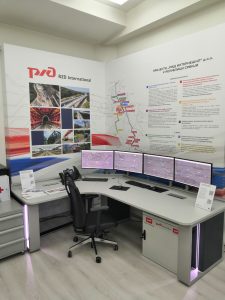 Russian Railways has opened a regional information and training centre at the Serbian Railways Head Office in Belgrade.

The information and training centre was established by RZD International, a subsidiary of Russian Railways, together with the Russian Railways Research Institute in the field of automation and communications (NIIAS) with active participation of Serbian Railways Infrastructure.

At the centre, the staff can get acquainted with the technologies used by Russian Railways for the construction of railway infrastructure, and the mechanisms of train-traffic control can be tested. Visitors can familiarise themselves with automated workstations for rail dispatchers and yardmasters, which operate as simulators. It includes a terminal for operational and technological communication, equipment for dispatch centralization, control over railway sections, and a traction power substation. Among other things, the centre is equipped with a prototype collective-use panel for the entire dispatch centre, which is designed to display the current status of the railways in real time.

Using the capabilities and equipment of the training and information centre, the quality of training Serbian railways specialists to work with the most modern and digital technologies will be significantly improved, Pavlov explained.

In 2013, RZD signed an agreement to perform construction and modernisation works for Serbian railway infrastructure. USD 941 million is the value of the contract, including a USD 800 million state export credit. Russia is involved in four main rail infrastructure projects and one project was related to the delivery of 27 DMUs. RZD has constructed and reconstructed more than 200 km of Serbian railway lines representing 5% of the entire railway network.

In September, RZD International and Serbian railway infrastructure signed the contract on the modernisation of the railway connection to Montenegro.