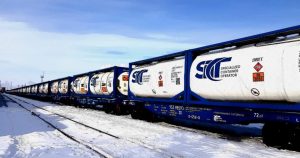 TransContainer has organised the first direct fast block train with petrochemicals specialised rolling stock traveling from Salavat, Russia, to Kotka in Finland. The train which consists of 114 tank-containers loaded with petrochemicals crossed the border at Buslovskaya station of Oktyabrskaya Railway.

Under the project it is estimated that 6000 tonnes of petrochemicals a month in a seamless round-trip to Finnish port of Mussalo, one of the biggest cargo hubs of Finland and Baltic region.

Two or three trains will be dispatched to Finland every month and their number will be increased to up to four – five trains in future.