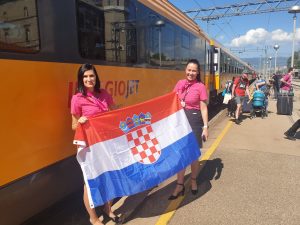 RegioJet has launched the first Rijeka-Prague train service running through Bratislava in Slovakia and other cities.

The first RegioJet train from Prague arrived on July 1st to Rijeka and Ljubljana carrying over 500 passengers on-board. The train has up to 12 cars with a capacity of 560 seats.

Approximately 30,000 tickets have already been sold. The trains will operate 3 times a week until July 11 following a daily basis operation until the end of August.

In September the trains will again operate 3 times a week and the last train will depart from Rijeka on 26th September 2020.

The ticket prices are ‘exceptionally’ low for one-way ticket including reservation and all services. For a trip in a coach with seats, passengers pay the price starting from EUR 22 EUR while for a ticket to a couchette car, the price starts from EUR 30.

“Never before have ticket prices to Croatia been so cheap and travel as convenient as this year. We want our prices to be set so that after difficult times, everyone can afford a holiday trip to Croatia or Slovenia,” says Ivana Kašická, RegioJet’s director.

The ticket price includes seat reservation and on-board services that passengers receive during the trip, including free coffee and breakfast, internet connection or free entertainment portal and offer of other on-board services.

RegioJet cooperates with the Croatian Railways HŽ, the Slovenian Railways SŽ and the Hungarian company Continental Railway Solution in the operation of the train.

In June, RegioJet has started sales of tickets for the Rijeka-Prague train service.