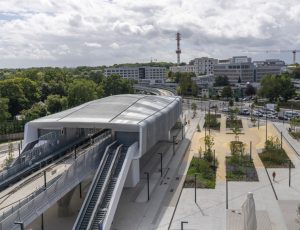 Rennes Métropole has put into commercial operation the new automated Rennes metro Line B providing transport connection between the towns of Saint-Jacques-de-la-Lande and Cesson-Sévigné.

The 13.6 km line is served by 15 stations and a depot in Saint-Jacques-de-la-Lande which has been designed to minimise energy and water consumption and preserve biodiversity.

EUR 1.34 billion was the total value of the project which has respected the initially established budget. Civil engineering works started in 2014 and from 2015 until 2018 the tunnel boring machine Elaine ensured the excavation of the tunnel.

The project covered the construction of 8.6 km of tunnels and underground stations as well as a 2.4 km viaduct constructed by the consortium of Razel-Bec and Eiffage Génie Civil. The viaduct connects the Beaulieu – Université, Atalante and Cesson-Viasilva stations.

Rennes Métropole and Semtcar awarded Siemens Mobility a contract to equip the newmetro line with the new generation of the automated metro system, Cityval, a turnkey driverless automatic metro system. “Together with Rennes Métropole, we are proud to inaugurate the new Line B equipped with the latest generation of Cityval automated driverless metro, which will strengthen the city’s ability to offer low-carbon emission mobility,” Laurent Bouyer, President of Siemens Mobility France said.

As part of this turnkey contract, Siemens Mobility provided the entire system engineering, delivered, and implemented the Cityval rolling stock on 25 trainsets, initially consisting of two cars, the automated train control system, the track system, the electrification, the platform doors, the operating control center (OCC), the garage workshop facilities, as well as the radio communication and real-time video transmission in the stations and onboard the trains. Siemens Mobility is also providing the services for operations and maintenance of the system, including the training of personnel, instructions, spare parts, and documentation.

The facility in Saint-Jacques-de-la-Lande, located at the western end of the line is designed with canopies on the roof and on the facade provide natural lighting, which also ensures working comfort.On the roof, photovoltaic panels are installed, which will produce nearly 80,000 kWh/year, as well as solar panels, for the production of domestic hot water. In the event of insufficient sunshine, in the winter season, the mixed wood-gas boiler will take over the delivery of the hot water.This has been sized to be able to operate mainly with wood used from local production.The gas will be used, if necessary, at the beginning and end of the cold period.For washing activities, an underground tank with a capacity of 63 m3 will collect the rainwater. After each wash, 70% of the water used will be recycled and supplemented with new rainwater, the remaining 30% being sent to the rainwater network after treatment.

With this second line, three-quarters of Rennes residents will now live less than 600 metres from a metro station, the objective being to eliminate around 50,000 car journeys per day in the metropolis.

Rennes metro Line B, crossing the metropolitan area on the South-West axis becomes the second line after 20 years since the first line (Line A) has been put in operation with the VAL technology, also delivered by Siemens Mobility.