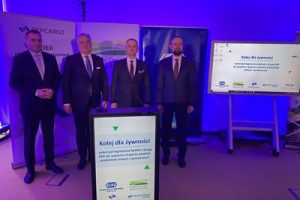 During a virtual event, where several dozen representatives of the agri-food industry, associations of producers, processors and state-owned companies that export agri-food products, the PKP Group companies presented their logistics potential and ability to deliver high-quality transport services for such goods. The ‘Railway for Food’ campaign is addressed to Polish food producers, associated in agricultural organisations and food companies, under the supervision of the Ministry of State Assets or the National Center for Agricultural Support. The conference was a symbolic opening of a new chapter of cooperation between railways and the agri-food industry. 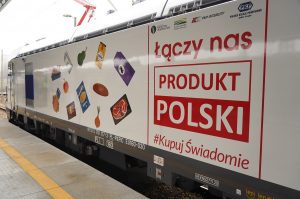 The Product Polski trademark is promoted on numerous information and advertising media, which are the resources of the Polish railways. For example, from December 2020 on Polish tracks, a modern PKP Intercity locomotive is running, designed with the logo of the campaign as well as graphics and content promoting the conscious selection of Polish products in stores.

“We want to show the transport and logistics possibilities of the PKP Group companies. Together with the Office of Rail Transport, we have already developed a programme for the reactivation of railway sidings. We also have over 150 properties at our disposal, on which intermodal terminals may be built. The necessity to invest in point infrastructure is one of our main demands. As railways, we want to listen to the voice and needs of the market, we want to strive to increase the share of rail transport in the transport of goods and work for the export of goods abroad. The low carbon footprint, compared to road transport, speaks in favor of rail transport. This is also expected by consumers of food products,” said Rafał Zgorzelski, member of the management board of PKP S.A. for strategy and logistics.

According to the National Center for Agricultural Support, in 2010, the export of agri-food products increased by 7 per cent compared to 2019, to EUR 34 billion. The 2020 imports also showed an increase of 4.9 per cent, reaching EUR 22.3 billion. These data clearly show that Polish entrepreneurs are developing on foreign markets, despite the restrictions introduced due to the coronavirus pandemic. Due to the growing export of agri-food products, the companies of the PKP Group decided to support the industry and propose logistic solutions that would meet today’s market challenges.

“Fast and product-specific transport is very important to be able to develop and gain new markets. Therefore, the cooperation of the transport operators with the agri-food industry is crucial in building an increasingly stronger position of Polish food,” Marcin Wroński, the deputy general director of KOWR said.

The three transport companies owned by PKP are able to provide a range of services from conventional rail transport and intermodal and multimodal solutions to road transport, supported by a comprehensive infrastructure such as conventional and container reloading terminals, including a grain terminal in Dorohusk, as well as a modernised rail infrastructure. Solutions in the field of customs clearance and phytosanitary services are also provided. 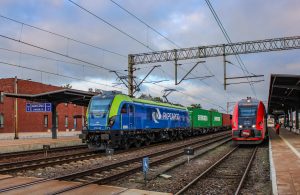 “PKP Cargo Group has the largest transport potential in Poland and is able to meet the requirements of companies in the agri-food sector. As a logistics operator, we can provide not only rail transport, but also full service from reloading, warehousing, customs formalities to freight transport on the last mile,” Piotr Wasaty, member of the management board of PKP Cargo explained.

In addition, there are plans for the construction of an intermodal terminal in Emilianowo in Bydgoszcz County, an agricultural region, which is designed to be used for transshipment of agri-food products. The region doesn’t benefit a developed terminal infrastructure and by the implementation of the project, the industrial and transport potential will increase particularly for the containerised traffic. This area cand be exploited as an external region for the ports of the Tri-City, in particular Gdynia Port, due to the route of the railway line No. 201. In addition, PKP PLK is carrying out the modernisation of the rail access to these ports, a EUR 575.9 million project expected to be completed by the end of this year. “The planned intermodal terminal will constitute a broader element of connecting Polish seaports with hinterland facilities, primarily within the agri-food sector,” Paweł Bukowski, CEO of Terminal Emilianowo said.