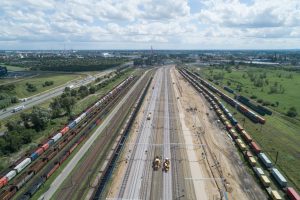 PKP Polish Railway Lines has announced that beginning of August electrification works started for the railway lines to the ports of Gdynia and Gdańsk.

The works are part of the project on rail access improvement at the Tri-City ports. “Thanks to electrification works and the reconstruction of the lines to the ports, trains will run faster, carrying more goods. The capacity of the access tracks to the ports will increase by approximately 50%. Investments at Gdańsk and Gdynia ports are very important for their development, but they also contribute to the modernisation of the entire railway network and the development of environmentally friendly transport,” Ireneusz Merchel, the CEO of PKP Polskie Linie Kolejowe said.

The reconstruction of the line linking the stations also includes the construction of a rail bridge over the Strzyża River and an underground passage at the former Gdańsk Kolonia stop to improve better access for the residents.

At the Gdańsk Northern port station, after removing 15 km of old tracks and 20 turnouts, the ground was strengthened, and the area was drained. The embankment is ready, on which 7 km of track and 20 new turnouts have been laid. The electrification works are progressing. The telecommunication and power installations are being laid and a new rail traffic control system is being installed. Kilometers of cables are also laid on the site. Works on the modernisation of the track at Westerplatte area and the track at the Gdańsk Kanał Kaszubski station are at the halfway point.

A 100-meter viaduct along a street is expected to be constructed starting October to replace the rail-road crossing by creating a collision-free intersection, while on the track to Westerplatte, rail and road crossings are being renovated.

As part of the Gdańsk rail access improvement project, more than 70 km of tracks, 13 rail and road crossings and pedestrian crossings will be reconstructed, and 221 turnouts will be replaced. In addition, three bridges, two viaducts and 18 culverts will be rebuilt.

At the Gdynia Port station, 170 km of tracks need modernisation and replacement. Over 65 km of old tracks and 170 turnouts will be replaced. Two control rooms and a local control center are being built, which will be equipped with new systems and devices, ensuring efficient and safe operation of a greater number of freight trains.

The improvement of the rail access at Gdynia port comprises the reconstruction and electrification of 115 tracks and the replacement of 356 turnouts. Two new railway viaducts and a bridge will be constructed, while 13 km of roads will be improved.

The Tri-City ports’ rail access improvement project will allow longer (740-meter) and heavier trains and the new railway traffic control system and devices will ensure safe and efficient transport services. The project is implemented with European funding under the CEF. PLN 2.6 billion (EUR 588 million) is the value of the ports’ rail improvement access of which 40% is the CEF funding.

“INEA is pleased to note the progress made in the implementation of two EU-supported projects under the CEF instrument. They are part of the railway modernisation on the TEN-T core network which will also offer increased access to and from the two Polish ports part of the Baltic-Adriatic Corridor. The investment is crucial for the development of intermodal transport, as well as increasing the role of the railways as a green transport mode,” Morten Jensen the Head of Unit at INEA said.

The project is expected to be completed in 2021.