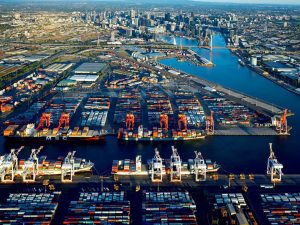 The Victorian Government gave its approval on the construction of a new on-dock rail at the Port of Melbourne, as part of a strategy to shift road transport to railways.
The project, which was proposed by the Port of Melbourne will see an investment of AUD 125 million (USD 84.2 million) in new rail infrastructure.
The port’s rail solution will be developed over the next three years and will see more containers moved by rail more efficiently, by-passing roads in inner Melbourne.

“The port’s rail solution is acritical and missing link in Melbourne’s transport and supply chain network. It expands the rail offering for freight and delivers environmental benefits by reducing truck movements, congestion and pollution,” Port of Melbourne CEO, Brendan Bourke said.
The port rail shuttle trains will have a capacity of 84 TEU containers, in comparison to a B-Double truck having a capacity of three TEU.

The project will improve the exports and will allow to use rail to move containers to distribution centres around Melbourne efficiently.

The project is being funded by a small increase in the tariff on full import containers of AUD 9.75 (USD 6.57) per TEU to take place no earlier than 1 April 2020.This equates to less than 5 cents on the wholesale price on an average sized television. The funds raised from the charge will directly deliver new sidings and connections for the rail project. The charge keeps the port competitive with Port Botany and won’t apply to exporters from the port.

The project is scheduled for completion in 2023.

“The Port of Melbourne is a vital part of our multi-billion dollar export sector and agriculture supply chain and on-dock rail will make its operations more efficient for Victorian exporters, removing congestion at the port gate. This will cut costs for regional exporters and increase the competitiveness of Victorian industry, creating local jobs,”Minister for Ports and Freight Melissa Horne said.

The government is also supporting the Port Rail Shuttle Network connecting freight hubs in Melbourne’s north and west to the port, new intermodal terminals planned at Truganina and Beveridge, new automated signalling for faster rail freight to GeelongPort and improvements in the regional rail freight network.