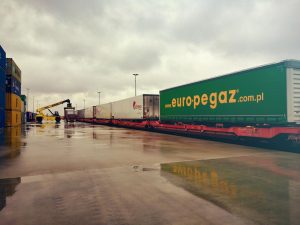 Clip Group and CFL Multimodal have launched a rail motorway train between Bettembourg-Dudelange in Luxembourg and Poznan-Swarzędz in Poland.

The first train left the intermodal terminal of Bettembourg-Dudelange on January 28 and it will run with a frequency of 4 round trips per week and it is expected to increase to 6 times per week. The train will cover the 1,000-km distance between the terminal in Poland to Bettembourg in Luxembourg in 23 hours.

The train transports containers, craneable as well as non-craneable semi-trailers.

The train will annually transport up to 15 000 semi-trailers, which is equivalent to 20 000 tonnes of CO2 savings. “The expansion of our intermodal service offering to Central Europe will give us the opportunity to address the craneable and non-craneable trailers market,” Fraenz Benoy, managing director of CFL Multimodal said.