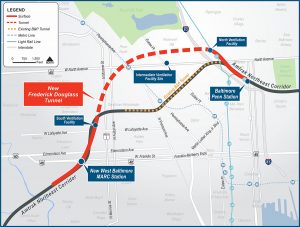 Amtrak has unveiled new plans to enhance and advance the Baltimore and Potomac tunnel replacement programme covering the modernisation and transformation of the 2.2 km tunnel connecting Baltimore’s Penn Station to Washington and Virginia.

In addition, the rail operator announced that the new tunnel will be named after Frederick Douglass, the late Maryland-born and world-renowned abolitionist leader.

“The B&P tunnel is reaching the end of its useful life. This project will modernise a critical part of the Northeast Corridor making the train work better for the 9 million passengers that depend on it each year. It’s a great example of what we can accomplish more of with the American Jobs Plan,” the U.S. Department of Transport Deputy Secretary, Polly Trottenberg said.

The project includes the construction of two new tube tunnels that will serve only electrified MARC Penn Line and Amtrak trains. In order to achieve this, MARC will electrify its Penn Line trains, and diesel freight trains will not be permitted in the two new tunnel tubes. 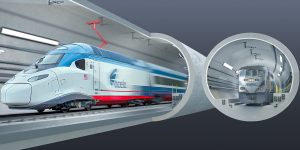 Michigan Department of Transport and Amtrak have agreed on a phased implementation approach, where the initial implementation will include two new high-capacity tunnel tubes for electrified passenger trains but defer the construction of two additional tunnel tubes that could be designed to accommodate freight trains in the future. To enable this new plan, Gregory Slater, Maryland Secretary of Transportation, announced that MDOT will electrify its MARC commuter trains through the new Frederick Douglass Tunnel.

Amtrak is currently performing final design and initiating property acquisitions to prepare for construction. Pending sufficient funding for the approximately USD 4 billion investment, early construction activities on the tunnel’s southern approach could begin over the next one to two years.

Early action work is planned to start in 2022, with the first bridge replacement planned for 2023.

The replacement programme of Baltimore and Potomac tunnel is a broad range of investments that will transform a 6.4 km section of the Northeast Corridor in Baltimore. It includes the new Frederick Douglass tunnel, a new ADA-accessible West Baltimore MARC Station, and the replacement of bridges, track, and rail systems.

The existing tunnel suffers from a variety of age-related issues such as excessive water infiltration, a deteriorating structure, and a sinking floor. There are no fire and life safety systems that help keep passengers safe in the event of emergencies, and excessive costly maintenance is required. Due to its age, delays are chronic, with more than 10 per cent of weekday trains are delayed, and delays occur on 99 per cent of weekdays.