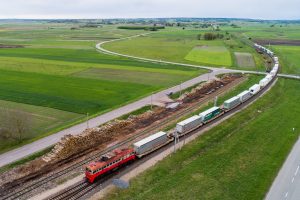 Lithuania’s LG Cargo, Poland’s PKP Cargo and CargoBeamer have launched an intermodal pilot train with road semi-trailers. During the test, semitrailers of eight transport and logistics companies were delivered*.

The train carrying 22 semi-trailers arrived on May14th at Sestokai terminal in Lithuania after a two-day trip from Kaldenkirchen intermodal terminal, near the German border with the Netherlands. Loaded on a special train wagon technology provided by CargoBeamer semi-trailers reached Sestokai by the European gauge Rail Baltica. At the terminal in Sestokai they were again connected to the trucks to drive the last mile to the final point of unloading.

Besides its contribution to the logistics sector, the project will have a positive impact on the environment promoting green transport.

“This is a business project but our efforts will also have positive impact on environmental protection. Railways are more environment-friendly than road transport as they release much less harmful gases,” Czeslaw Warsewicz, CEO of PKP Cargo explained.

The new transport service will reduce the CO2 released into the environment by up to 100 tonnes compared to the carriage of semi-trailers separately by trucks.

The long-distance transport of semi-trailers by rail is encouraged by the European Union, as it has a lower impact on the environment and increases road safety. It is also beneficial for logistics and road transport companies, as it saves fuel and human resources. In addition, it is easier and faster to cross borders between countries, thus avoiding long downtime and possible delays at customs.

The intermodal pilot train was the first ever semi-trailer transport performed by the railway network in the Baltic States.

“This pilot is of great importance to us as it will make it possible to test new possibilities for freight transport from Lithuania via Poland to Western Europe and in the opposite direction. This route is currently dominated by road transport and we want to change this unfavorable structure,” Warsewicz said.