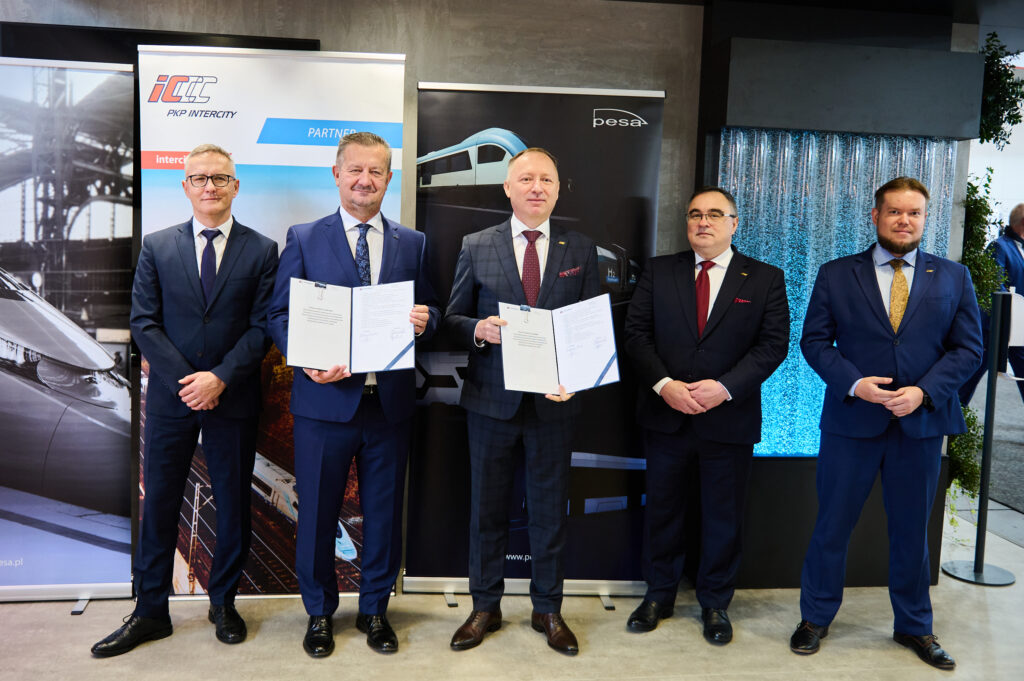 PKP Intercity and Pesa Bydgoszcz signed a railcar modernisation contract for 59 units of the 152A and 154A series. PLN 376 million (EUR 79.3 million) is the value of the contract which for the Polish rail operator means another step to deliver increased comfort for its passengers.

The works will be divided into two stages. In the first, the repair will be performed on the 5th maintenance level, maintaining the essential operating parameters of 24 passenger cars of the 152A type and 35 of the 154A cars. During the second stage, after 18 months of operation, the cars will undergo inspection at maintenance level 3.

After railcar modernisation project is completed, the wagons will be adjusted to allow a speed of 200 km/h. They will offer numerous amenities for passengers, such as Wi-Fi, individual lighting, new air conditioning, a dynamic information system displayed on light boards, or new pop-up and sliding doors.

The contract is to be implemented by 2026, and the first carriages will be delivered after 250 days (8 months) from the moment they are handed over to Pesa.

“We implement our rolling stock strategy very efficiently. Of the PLN 7 billion [EUR 1.5 billion] planned between 2017 and 2023, we have already contracted over PLN 6.4 billion [EUR 1.35 billion], which is 99% of the programme. The contracts have been signed with Polish producers. In 2030, we want to reach the level of 88 million passengers per year, which will be helped by investments such as the one carried out in cooperation with the company from Bydgoszcz. The refurbished vehicles will serve passengers all over Poland,” Marek Chraniek, President of the Management Board of PKP Intercity said.

PKP Intercity and Pesa have previously signed repair and modernisation contracts. The national carrier has already received from 110 modernised carriages of type 111A-20, which were modernised and repaired at the fifth maintenance level. 15 more such vehicles will join the company’s fleet. Completion of their acceptance, in accordance with the provisions of the contract, is planned in the second quarter of 2023, and the value of the entire contract is PLN 540.4 million (EUR 114 million). ED74 depots are also being modernised in Bydgoszcz. So far, the company has collected 7 out of 14 vehicles. The value of the entire order is PLN 275 million (EUR 58 million), and the last modernised vehicle will be delivered to PKP Intercity in 2023.

At the end of 2020, PKP Intercity received the last of the 125 carriages that were modernised by Pesa. Thus, the contract worth nearly PLN 470 million (EUR 99 million) was completed. Passengers all over Poland use modern wagons.

“We are very pleased that Pesa Bydgoszcz can extend its cooperation with PKP Intercity by implementing another contract. Thanks to this, we can make our own contribution to the return of Polish railways to good tracks,” Krzysztof Zdziarski, President of the Management Board of Pesa said.

This year, the Minister of Infrastructure Andrzej Adamczyk has announced that PKP Intercity’s rolling stock modernisation programme increased to PLN 27 billion (EUR 5.7 billion) from PLN 19 billion (EUR 4 billion) until 2030. The company will modernise its EMU fleet, carriages and locomotives, and will convert other units to allow speeds between 160 and 200 km/h.

This year, the company has started a tender to acquire 16 electric-diesel locomotives including their maintenance, which should be designed to run at a maximum speed of 160 km/h.

To modernise its fleet, PKP Intercity has submitted a project to receive CEF funding for the installation of onboard ERTMS technology on 100 locomotives.

According to PKP Intercity’s investment plan, in 2030 the company will run about twice as many trains and offer passengers a high standard of travel and increased capacity. Travels at a speed of 160-250 km/h will become the norm, which will shorten travel times. The trains will be faster than the current fleet which runs at an average speed of 120-160 km/h. Higher comfort and functionality will be ensured by the new design of the space inside the trains, the assumptions of which are currently being worked on.

The new vehicles will be adapted to the needs of various groups of travellers, such as people with disabilities or families with children. In 2030, the entire fleet of the carrier will be new or modernised, which will ensure a high level of safety and comfort.