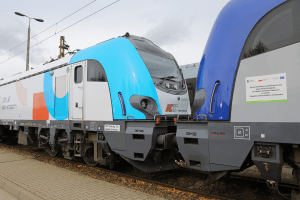 PKP Intercity has announced on January 5, 2022, a tender for the supply of 16 hybrid locomotives along with the provision of maintenance services. The rolling stock manufacturers may submit their offers until mid-February 2022.

The electric-diesel vehicles will be the first vehicles of this type in the company’s rolling stock.

The locomotives will be designed to run at a maximum speed of 160 km/h in electric traction and 120 km/h in diesel traction.

The company assumes deliveries of all vehicles within 48 months (4 years) from the contract signing, while the first one must be delivered not later than 30 months. PKP Intercity will then start the trials for a period of 6 months and after any technical corrections have been introduced, the next locomotives will be delivered.

In June, the long-distance operator has launched a tender for 63 MS locomotives with an option for 32 additional vehicles designed for speeds of 200 km/h and equipped with ETCS Level 2.

Recently, PKP Intercity signed a EUR 56 million contract for the procurement of 10 multi-system locomotives, and in February, a contract was signed for 10 diesel shunting locomotives.

In June, the EIB has announced that if the appraisal will be successful for a EUR 2 billion investment for rolling stock renewal project, the bank will provide a EUR 955 million loan to support the plans for vehicle modernisation and procurement. In December, the EIB and PKP Intercity signed a EUR 434 million loan agreement for rolling stock programme. The signed loan is the first part of a wider PLN 4.5 billion (EUR 1 billion) loan commitment approved by the EIB Board of Directors for PKP Intercity.

The procurement of the hybrid locomotives is part of PKP Intercity’s rolling stock renewal programme estimated at PLN 27 billion (EUR 5.95 billion) including the modernisation of the technical facilities. As part of this strategy, the company will invest PLN 24.5 billion (EUR 5.4 billion) to renew its entire fleet by 2030 and PLN 2.6 billion (EUR 1.2 billion) will be used to modernise the stations.