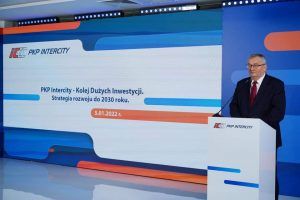 The investment of PKP Intercity rolling stock programme has increased from EUR 4.2 billion (PLN 19 billion) to EUR 5.95 billion (PLN 27 billion) with a perspective until 2030.

Following this investment strategy, the long-distance rail operator intends to run about twice as many trains in 2030 and offer passengers a high standard of travel, while journeys at speeds between 160 and 250 km/h will become the norm, which will significantly shorten the travel times. Currently, most of the rail services are providing by trains running at 120-160 km/h.

Greater comfort and functionality will be ensured by the new design of the space inside the trains, the assumptions of which are currently being worked on. The new vehicles will be adapted to the needs of various groups of travellers, including people traveling with children or people with disabilities.

“PKP Intercity is updating its development and investment strategy until 2030 to become the number one ecological long-distance carrier in Poland willingly chosen by customers. In this way, safe, comfortable, predictable and accessible travel as well as high-quality, modern services will be ensured,” the Minister of Infrastructure Andrzej Adamczyk said.

Under the 2030 strategy, the rail operator will also modernise 54 EMUs, 87 electric locomotives, 1,500 coaches, and will convert 13 SM42 diesel locomotives into two-unit vehicles.

For PKP Intercity rolling stock renewal, the European Investment Bank provided in December a EUR 434 million (PLN 2 billion) loan as part of a EUR 1 billion (PLN 4.5 billion) funding package. The awarded loan will support the acquisition of 108 electric locomotives, 300 passenger coaches and 38 push-pull rakes of coaches, as well as the modernisation of 14 electric multiple units and 288 passenger coaches owned by PKP Intercity.

Due to the investment PKP Intercity carried out in the last years, 800 new of modernised vehicles entered operation including comfortable wagons and the most modern electric locomotives in Poland.

It is estimated that more than 30% of PKP Intercity’s fleet in operation by 2028 will have been acquired or modernised with the financing of the EIB. The investments will significantly increase the number of passengers bringing additional 25 million travellers in 2028.