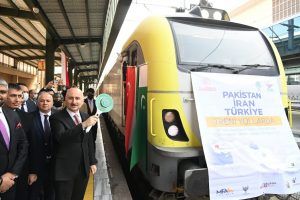 The freight train travelled almost 13 days between Pakistan and Turkey saving time and costs compared to sea transport which take 35 days. The train departed from Islamabad railway station on December 21 and travelled across 5,981 km of rail lines of which 1,990 km in Pakistan, 2,603 km in Iran and 1,388 km in Turkey. The train service will offer a new and faster option to industrial and business companies on the Pakistan-Iran-Turkey route.

“We aim to make a regular train service provide European connection by crossing Marmaray. With the resumption of our Islamabad-Tehran-Istanbul freight train services, railway transport in the trade between the two countries will be improved and its share will increase,” the Minister said.

The Islamabad-Tehran-Istanbul train project is implemented by Pakistan, Iran and Turkey to boost the development of a competitive transport service and the trade relations. The train connection is reducing the transport time to 12-14 days between Islamabad and Istanbul providing a great opportunity to further increase export activities and the access to the European and Asian markets.

The implemented projects are strengthening Turkey’s position on the most important international railway corridors. The country has broken the export record in 2021 worth USD 225 billion achieving a global trade share of 1%. Turkey increased its 2021 exports by 33% when the global trade in goods increased by 10%, the transport minister explained.

“Pakistan, Iran and Turkey took the first important step towards the regional connection and the three countries are working on a passenger train service project expected to start in the near future,” Iran’s Ambassador.

The ceremony was also attended by Iran’s Ambassador to Ankara Muhammed Ferazmend and the Pakistani MP Mahdum Zaid Qureshi who said that “the project will play an important role not only to increase regional connectivity, but also to promote economic and commercial activities in the Economic Cooperation Organisation (ECO) region.