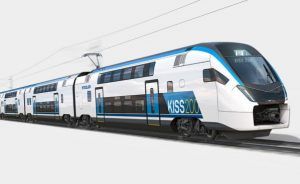 The Administrative Court in Vienna approved the decision of ÖBB to award Stadler the contract for the delivery of a 186 Kiss double-deck EMU fleet, following some confusion regarding Stadler’s qualified electronic signature. Now ÖBB can now conclude the framework agreement with Stadler, after the conclusion of the tendering process was delayed by court proceedings, and all the legal obstacles have been removed.

The award decision announced by ÖBB signals that the way is clear for the call-off order of the first vehicles.

In September, the Austrian Federal Administrative Court declared ÖBB’s award decision null and void due to an alleged formal error. The court had been prompted to act by an objection from co-bidder Alstom, which had been excluded from the proceedings. All the points raised by Alstom were rejected by the court. Following the countr’s decision, ÖBB informed Stadler that it is obliged to revoke the contract initially awarded to Stadler and should be re-tendered.

In October, Stadler informed that the electronic signature, which was declared an alleged formal error by the Austrian Federal Administrative Court, is recognised by the competent international authorities and has already been used hundreds of times by Stadler when participating in tenders in the EU area. Numerous bids signed in this way have been successful in previous tenders, including a contract in January 2021 for the delivery of rescue trains to ÖBB.

The framework agreement won by Stadler has a 10-year term and a total volume of up to EUR 3 billion. The agreement covers the manufacture and delivery of various four-car, five-car and six-car double-decker multiple-unit Kiss trains.

The Kiss double-deck EMU fleet will be manufactured at Stadler’s new centre of excellence in St. Margrethen, Switzerland. A first call-off order is expected to be made in the near future. ÖBB and Stadler will publish further information on the vehicles and the initial order in the coming weeks.

Counting the framework agreement for ÖBB, Stadler has so far sold over 550 Kiss trains.